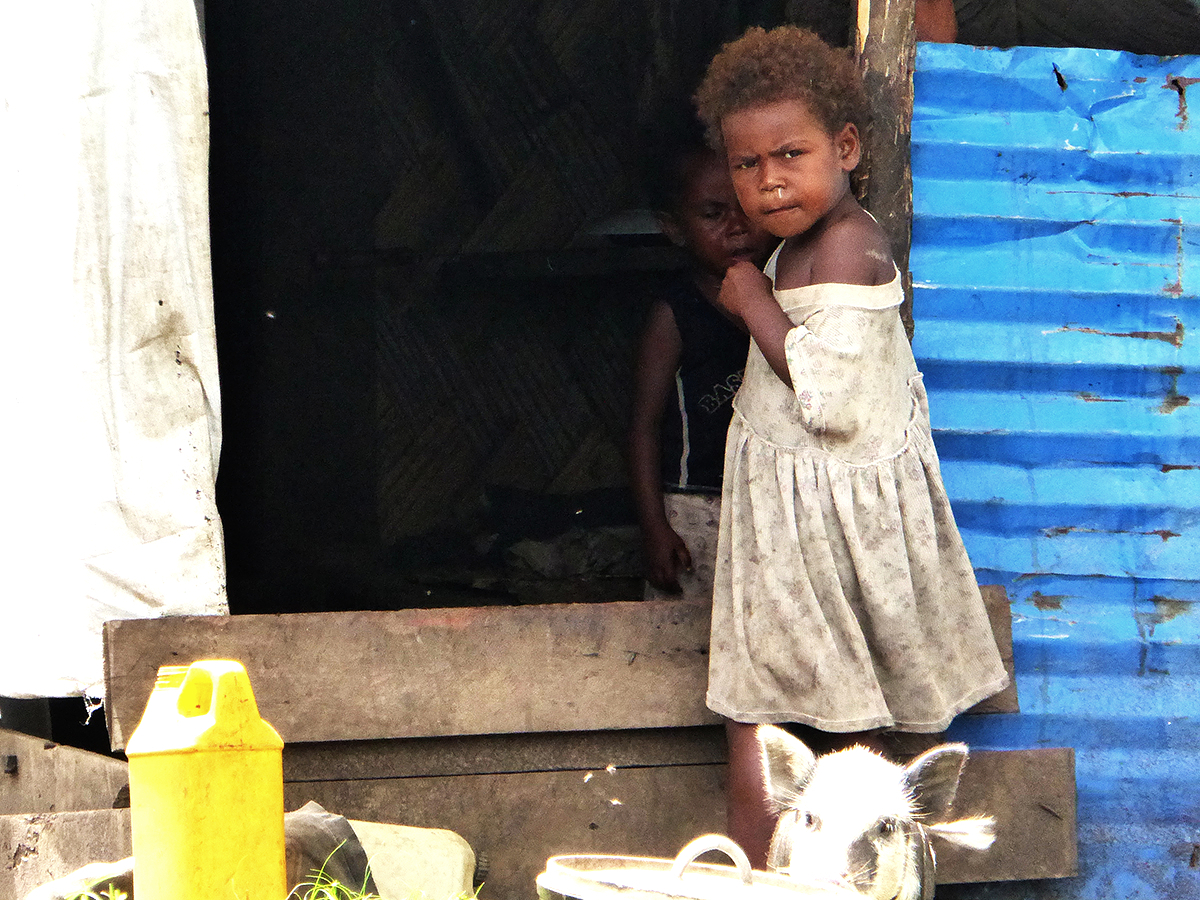 Part One - The Media, Tourism, and Ourselves during Natural Disasters.

Part one compares the imapct of Cyclone Pam on Tanna Island in Vanuatu in the middle of March 2015, with the major earthquake occuring in Nepal around one month later.

GoTo Part 1 :
Is it Callous Indifference or Hopeless Impotence ?

Part Two - A Case Study of a Community in a Small Island Nation.

Part two takes a look at the impact of cyclonic events on small island developing states. A case is made for the fostering of Community-based Alternative Tourism on the island to help its people to gain resilience against future disasters.

PART TWO : Observations of Relief Actions | What are the Short & Long Term Needs ? 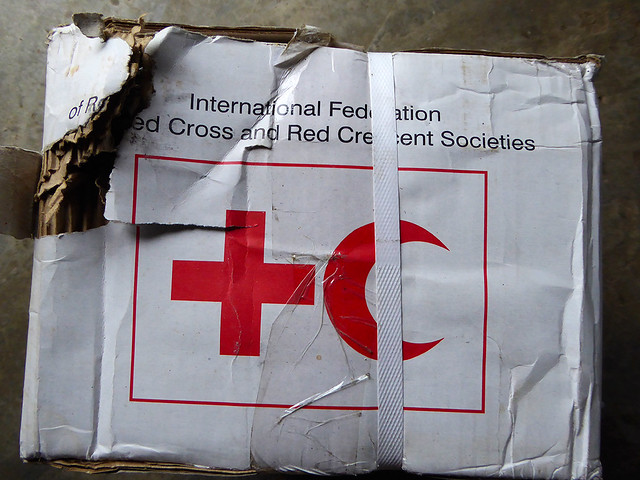 This is the second of two articles that look at natural disasters and our attitude towards them. In March 2015, Cyclone Pam curved it's path through Vanuatu passing directly over the Island of Tanna. Cyclones are common in many parts of Oceania, but prior to 2015, Category five cyclones were rare and the magnitude of destruction caused by Cyclone Pam was unprecedented.

This article firstly deals with the apparent dysfunctional nature of relief operations, and the hindrance of aid actually reaching those in need. Secondly, the needs of Tannese communities in the aftermath of the cyclone is discussed. Tanna along with so many Pacific islands, is a small remote island, that is relatively isolated, and possesses a rudimentary infrastructure. The Cyclone destroyed most of the islands dwellings, along with its entire subsistence food crop, leaving local Tannese highly vulnerable. Thirdly, the article discusses the needs of the local Ni-Vanuatu people subsequent to the disaster. As would be expected, short-term needs surround food and shelter. However, longer-term the need for robust housing, and the necessity of developing resilience in the two main commercial activities, that of coffee production and tourism, is evaluated. 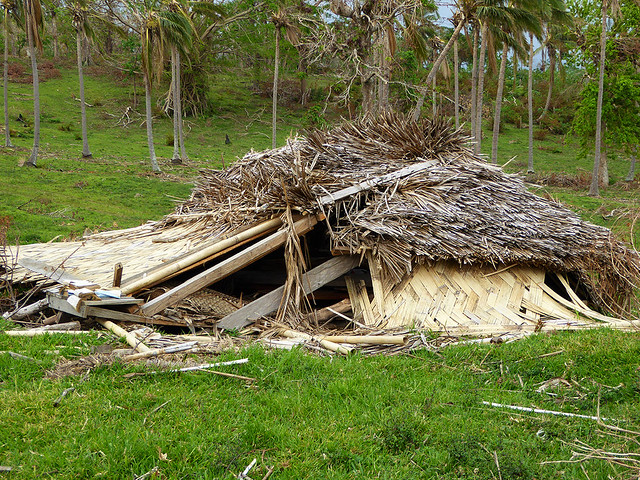 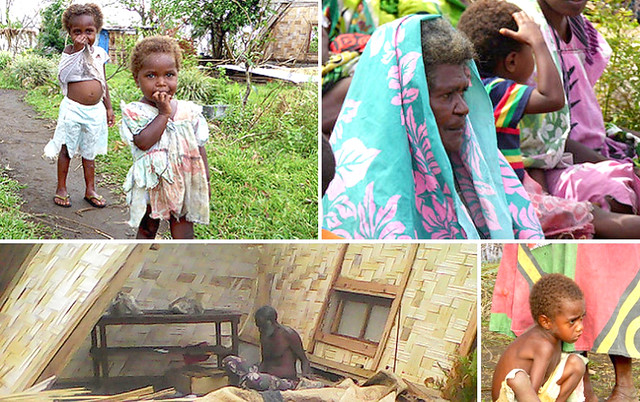 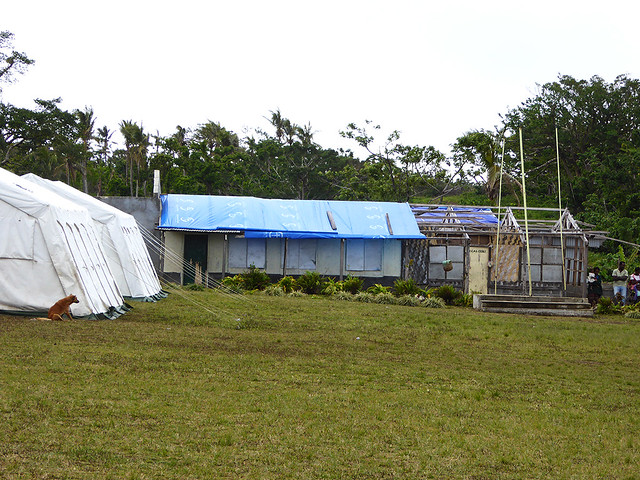 In the short term, food and shelter became the primary concern. Food has been a short-term requirement ( for the first year subsequent to the event), while shelter (particularly sustainable housing), is both a short and a long-term requirement.

It became clear that most short-term needs had to be provided by the major players, as the logistics and scale required was simply too great. Mobilizing its delivery, while difficult, happened and as a consequence, a skeleton of normality returned. There was also ongoing aid being provided from lower tier institutionalised agencies. While a number of individuals and smaller NGO’s attempted humanitarian aid, this was generally stymied by a lack of their inability to transport goods and supplies to the island.

Inefficiencies, inadequacies, and unpreparedness all affected the distribution of aid to those desperately in need. Despite exhaustive efforts by a number of local community leaders to get relief supplies to their communities, the writer was astonished to observe inaction by Provincial Government officiers (responsible for the distribution), who appeared incapable of the massive task, and who appeared oblivious to the consequences of their inaction. A subsequent visit to Nepal and discussions held with a number of people there appeared to indicate similar occurrences happened there after the massive earthquake. Commonality seems to surround an absence of civil emergency systems, along with checks of verification and accountability.

Further, the way in which political agenda ’s at national, regional, and community levels seemed to interfere with distribution was disheartening. The political maneuvering appeared to be universal, and it is fairly well reported that wrangling between national administration and aid agencies delayed the distribution of relief supplies for a significant period of time, believed to extend into days. The writer observed firsthand an area of Tanna not receiving any relief for over a month subsequent to Cyclone Pam, despite being on a major transportation route, and whose plight must have been known to administrators. Starving communities were left watching copious relief supplies being trucked elsewhere through their region, and stories surfaced of villages receiving inordinate amounts of relief supplies, and of chiefs hoarding and distributing only to their followers. Of course, in times of disaster and chaos, stories are rampant and the truth is never really established with any certainty.

An investigation into the handling of natural disasters in other countries will likely provide parallel, but similarly unsubstantiated reporting. It is clear that there is a need for the establishment of robust civil emergency systems, where there is distinct demarcation of authority, responsibilities, and obligations. The logistics should incorporate infallible verification and reporting so that there is public accountability for actions or inactions on the part of people and organisations involved in humanitarian aid. There is also the need for empathy and bureaucratic selfishness, rather than any thought of possible personal gain or political advantage. 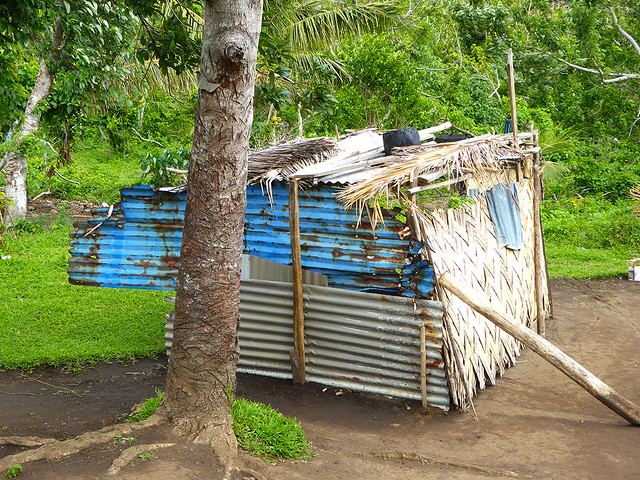 Housing has been dealt a serious blow in Vanuatu, and while populations struggled to re-use existing materials salvaged from the destruction of Cyclone Pam, the real disaster occur subsequently, when these materials rotted away and there was nothing to replace them. Other buildings critical for communities to function, such as schools remained damaged and classes were still being held in makeshift tents some years later.

Establishment of a simple Robust Housing System for Ni-Vanuatuan families is needed urgently. However, to date implementations have been haphazard, uncoordinated and have largely been ineffectual. A lack of skills, adequate materials and resources are largely to blame. An exception is the work carried out by a number of Rural Training centres that have raised the level of building construction and workmanship somewhat.

Clearly, a population surviving on subsistence farming, along with a government with insufficient funds, and a lack of political will, are major factors inhibiting the establishment of robust housing programs. 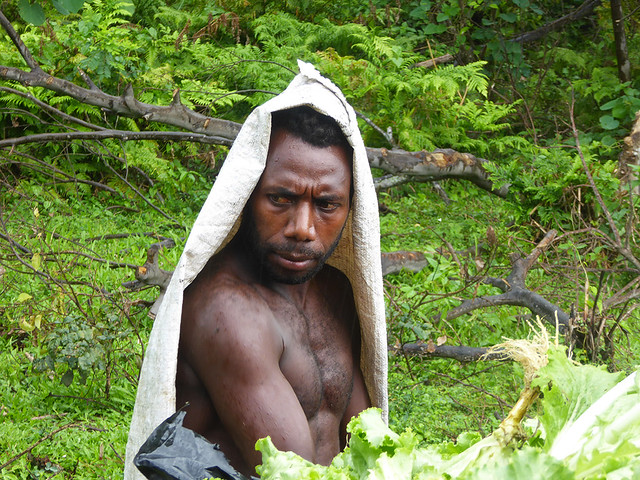 It appears sensible that effort is needed to support the two industries that provided most employment and income to the people at grassroots level : Coffee Cultivation and Tourism. Tanna is reliant on these two industries for its ongoing well being, and together they represent the “fishing rod” to Tannese communities. The capability of both suffered serious damage and are taking years to recover. The medium and long-term well-being of the people of Tanna will rely on the period of time that it takes for these industries to bounce back. 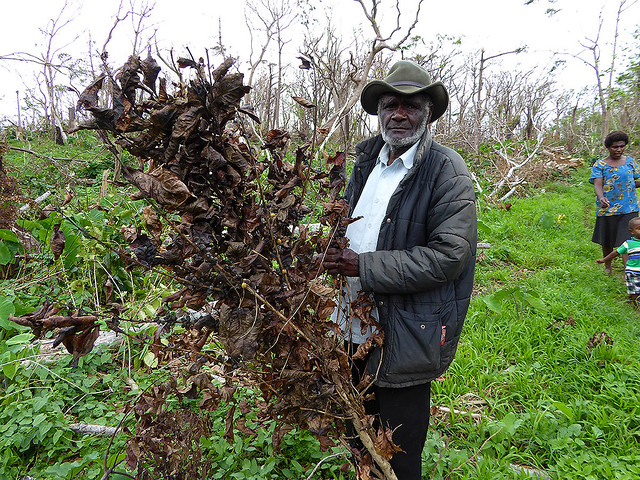 Most of the coffee plantations on Tanna were flattened by the cyclonic winds, and while considerable mentoring by outside coffee interests occurred regarding coffee cultivation, little-concerned recovery procedures. Instead of systematic pruning programs designed to get plants back into production, growers were unable to find a way forward and simply left their plantations to die, or become overgrown by the reviving rainforest. Providing Robust toolkits to Tanna Coffee Farmers to enable them to clear the multitude of bush debris overlying their coffee plants and to carry out the drastic pruning required to rehabilitate their coffee plantations, would have been positive proactive action. Instead, growers have been left to start again or persevere with distorted plants that are likely to yield diminishing returns.

There appears to be a huge misconception in regard to the cultivation of coffee,  that such events are just a ‘blip’ on the radar, that plantations will recover quickly and are capable of producing quality crops in subsequent years. It is now three years after the event of cyclone Pam, and only now is some recovery in coffee yield taking place. Without a leadership role being taken to implement mechanisms that might lead to minimising impacts on coffee cultivation, it is hard to see that coffee will provide a sustainable industry in this cyclone-prone region. Given current cyclonic events in Melanesia, it is only a question of time before another category five cyclone impacts the island, with the same devastating effects. If such events occur every four years, its hard to see how the industry can survive without intervention. 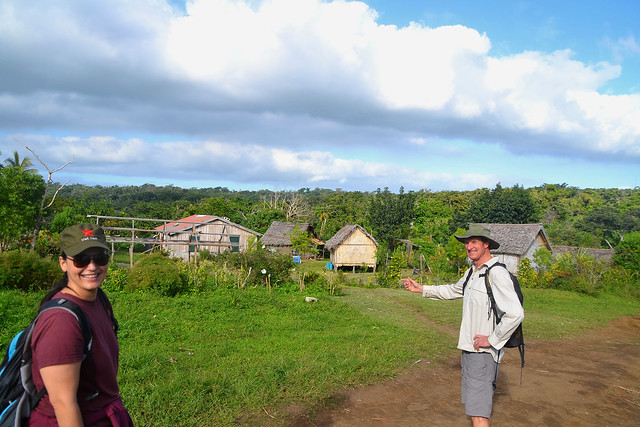 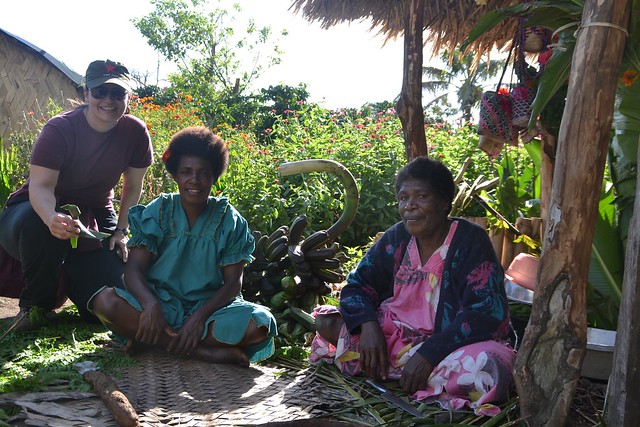 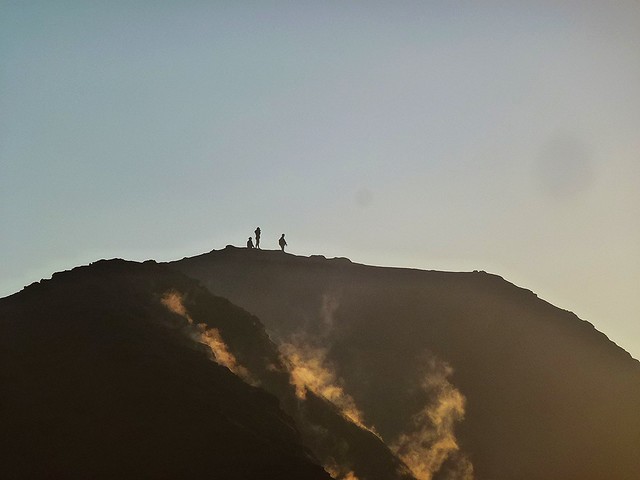 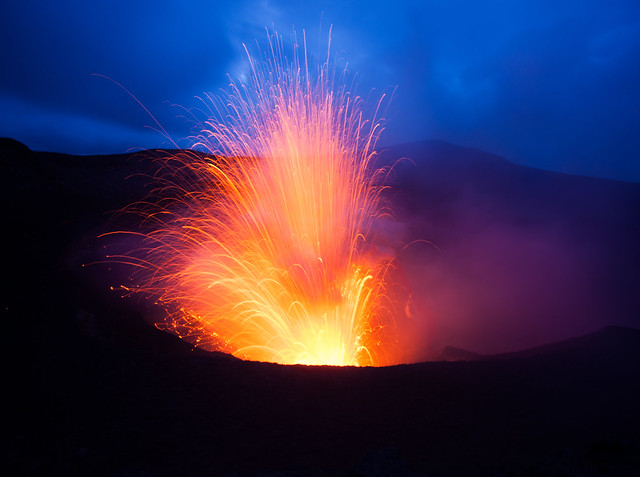 Tourism has the ability to recover the quickest. This is in part due to the main attraction, Mt Yasur Volcano being little affected by the events of Cyclone Pam. Because of this, tourism has the capability to attain normality within months after a disaster, whereas it is estimated that the coffee industry will take four years to return to its previous levels.

Community resilience in the face of adversity will depend on their stewardship of things that will provide pathways out of destitution. Therefore, community-based ‘alternative tourism’ projects should be promoted and nurtured, with ‘mass tourism’ restricted. In times of adversity, local populations will, through their own self-interest, rebuild, re-assert, and ultimately re-establish ‘their’ island as a tourist destination.

Alternative tourist operators directly employ staff from their local village to help service their accommodation, they employ guides from neighbouring villages and have systems of payments to all landowners that Tours and Walks go to, or go over. They also provide substantial numbers of customers to nearby activities and coordinate with other operators to fulfill visitor needs. There is substantial worth to the wider community to have such tourism operations back in operation as quickly as possible, and community ‘working-bees’ achieve this at minimal cost.

Mass tourism is often touted as the panacea for many problems, but is not appropriate in this case. The number of resort-based and comfortable holiday destinations in the pacific increases daily. Tanna is not a comfortable destination, and its appeal has always stemmed from its image of being on the ‘road less travelled’, that has at its heart ‘cultural authenticity’. Tanna has never been able to compete in the ‘fly and flop’ tourist market, and any attempt at scaling numbers will merely destroy the islands authenticity and its subsequent attractiveness to travellers. Further, as employees rather than stakeholders, communities will lack the commitment, ability, and resources to get such scaled concerns back on their feet quickly. This is attested by the fact that many of the major resorts in Port Vila, on Efate Island, remained out of commission for around a year after cyclone Pam, and were only brought back at great cost to their owners. Obviously, such delays happening on a recurring basis would make such tourist operations marginal at best.

The Future for Tanna Island : What happens next ?

As always, hindsight is twenty-twenty vision. Time has marched on and along with it recovery is slowly taking place, much due to people just moving on with their lives as best they can. Have lessons been learnt ....... that is hard to answer, but neither substantive mechanisms or resources have been put in place as a consequence. The national disaster co-ordination organisation NDMO (Vanuatu National Disaster Management office) is more prominent, but it is difficult to assess whether or not it is being more effective. If those affected by the recent volcano in Ambae, and Cyclone Hola are anything to go by, there is a long way to go.

Short-term relief will always be dependent on international help and the goodwill of major aid agencies. Looking longer-term, what has happened on Tanna regarding community needs ?