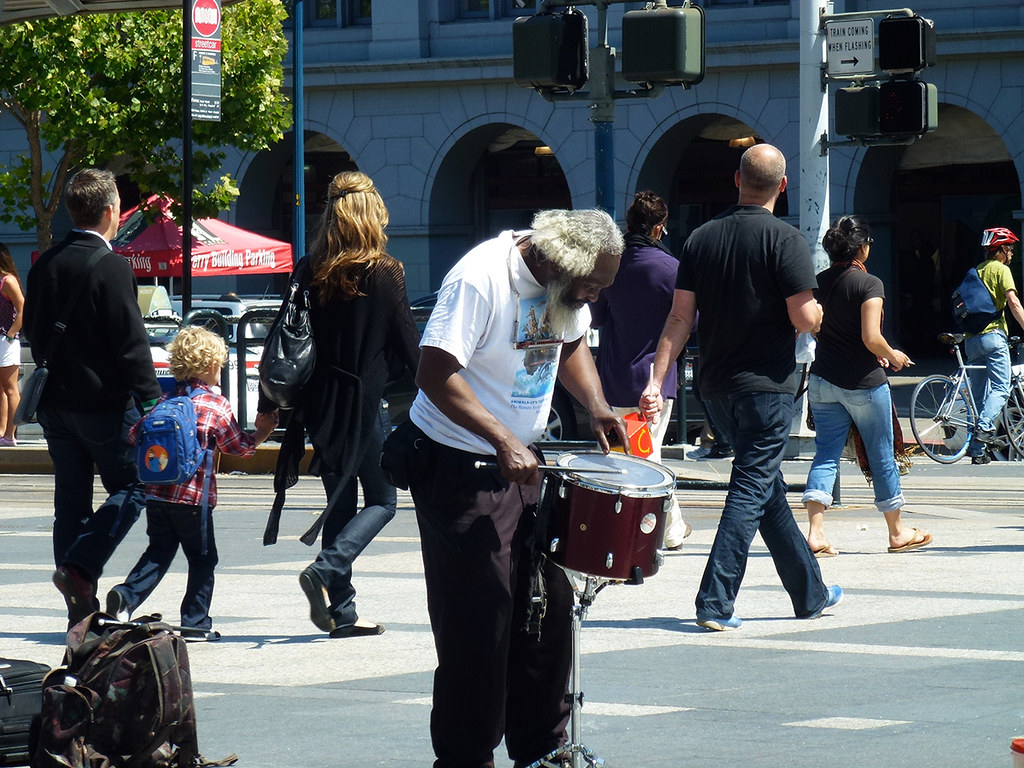 Homelessness and Tourism : It's a Global Phenomenon. 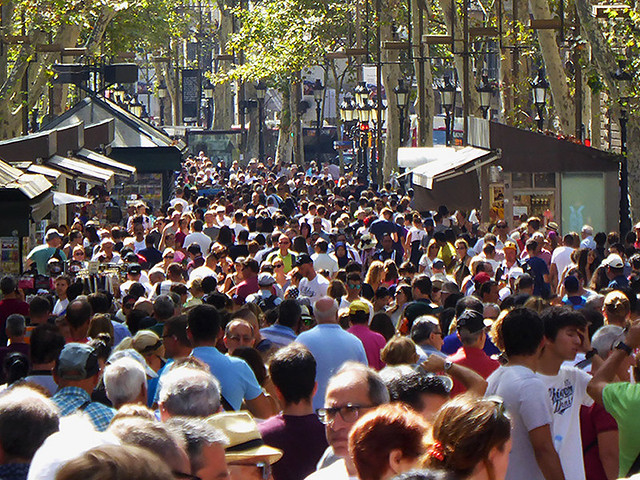 In the past, homelessness has never been seen as a first world problem, but changing global mobility has seen unprecedented tourism, and consequent pressure on renowned destinations such as New York, Barcelona, Los Angeles, and Rome, has increasingly highlighted its existence to travellers.

The effect of Tourism on Barcelona.

Barcelona is a destination that has made headlines because of its rampant over-tourism which has initiated reaction amongst the locals, demanding that the government take steps to look out for and provide sustainable living for Barcelona’s citizens. Apartment owners are obtaining a far greater return from AirBnB bookings than they could ever obtain from long-term local rental, and this has placed extreme pressure on accommodation. Soaring accommodation costs have simply pushed locals out of parts of the city, and some into the streets.

While it may be hard to spot in peak times, homelessness has also piqued the curiosity of travellers. In Barcelona a tourism niche has developed (Arias, 2014) that is; part Social Agency, integrating the homeless into tour programs; part Educational NGO, in making visitors aware of the plight of the homeless; and part Capitalist Venture, making money out of an extreme situation.

However, this raises ethical questions of whether it is simply a case of “voyeuristic poorism” (Gentleman, 2006).

The Difference Between Third World and First World Homelessness. 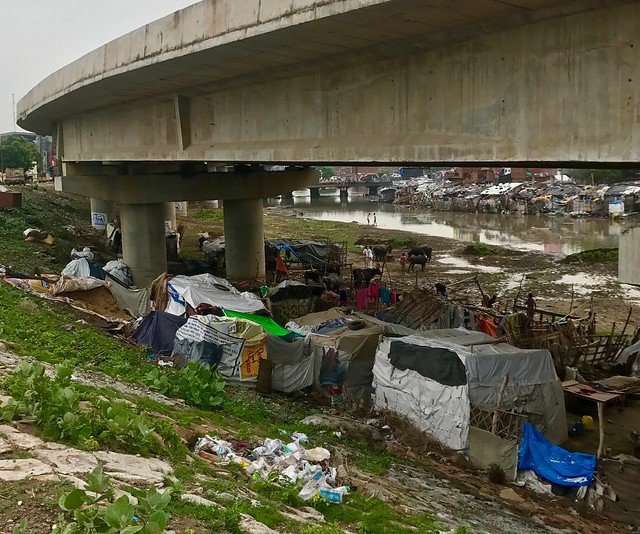 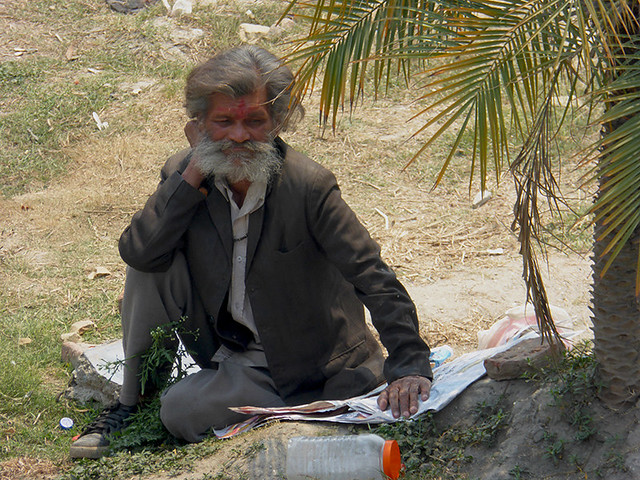 A distinction perhaps needs to be made between homeless peoples in developed countries, as compared to developing nations.

Within developing nations, governments are not in the position to provide sufficient social safety nets for their people. It is a problem of scale, contributed by high population, little employment and few opportunities. Often whole families and communities are born into a life of hopelessness where the chance to rise out of the mire takes a miracle. To the traveller, this can be overwhelming.

But this is not the "homelessness" prevalent in developed countries.

Homelessness is a Complex Social problem that few want to Face. 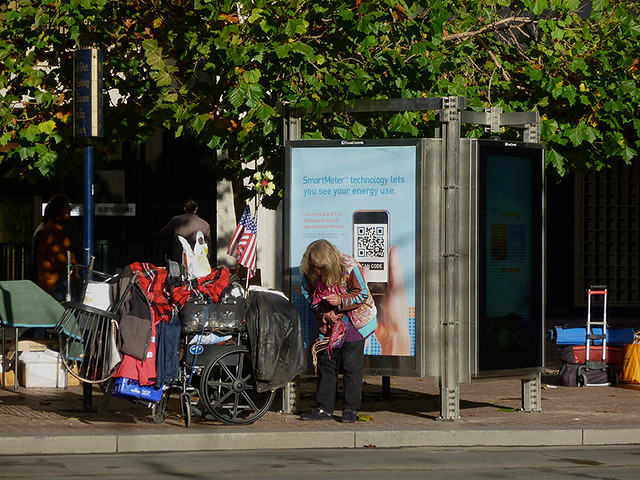 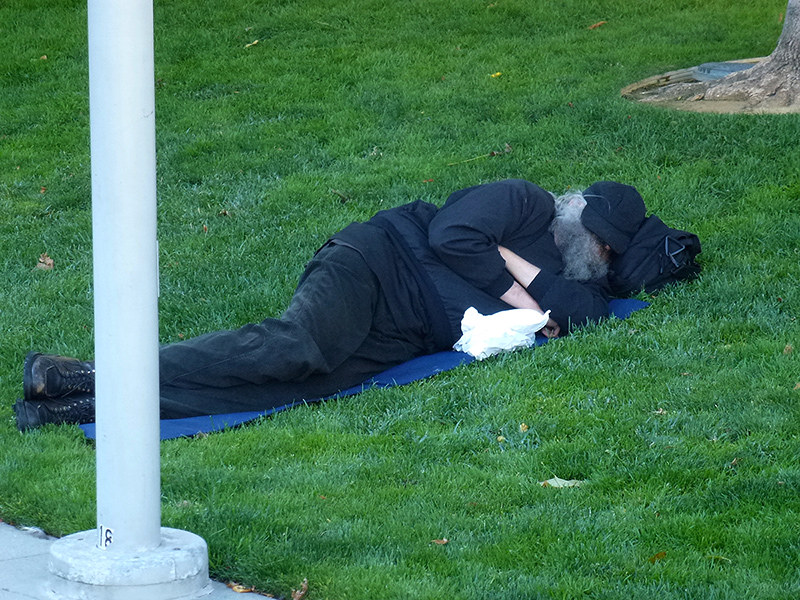 Homelessness in the developed world is seen as an omission by communities to provide the basic necessities for people living within their location (Chamie, 2017). It’s a complex problem where reasons are many, actual statistics are blurred, political finger-pointing rampant, and solutions in the realm of fantasy. Contributing factors varying greatly from city to city, and are the result of internal and external factors.

At the level of the individual, personal issues such as mental illness, alcoholism, or an inability to discipline themselves to hold down regular employment clearly impacts peoples lives. In other cases, changing circumstances such as a family breakdown, the demise of a close friend or family member, or the loss of cherished employment can place individuals in a fragile state.

External forces such as city officials failing to carry out appropriate planning research, approving projects that dislocate populations, or simply not supporting social support systems, sets people up to fail.

For popular tourist destinations, the pressure on accommodation has merely aggravated the problem, and caused it to become more pronounced.

Going nowhere and nowhere fast
We shame ourselves to watch people like this live.
But who gives a damn about Jackie Brown?
Just another lazy man who couldn't take what was his.
One helluva life Jackie Brown.
Forevermore, Jackie Brown
Amen and amen - Jackie Brown? 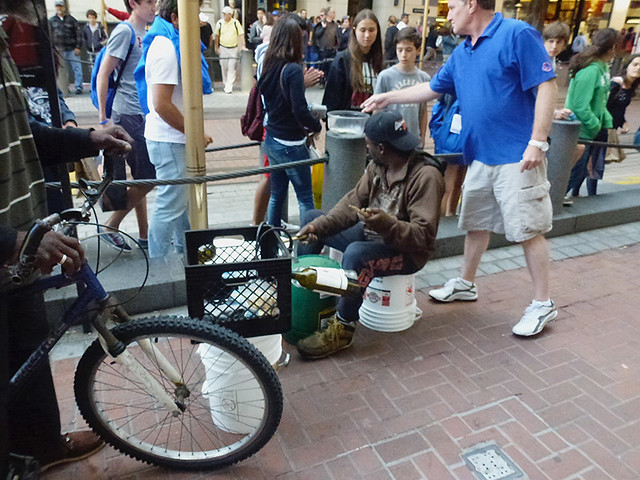 Americans appear comfortable with people that are down and out, and the ever-present loitering and shadowy life that surrounds them. The great depression hit American society hard and the human toll that occurred as a result, has been the subject of many books, movies, and music. Many past and current artists have referenced the problem of homelessness ; Elvis Presley (In the Ghetto), Merle Haggard (If we make it through December), John Mellencamp (Jackie Brown), Megadeth (Breadline), Pearl Jam (Evenflow), and many songs by Bruce Springsteen just to name a few. Americans care about the situation, but like elsewhere, the American system has little in the way of answers.

By virtue of its size, New York has the largest number of homeless, but large numbers of homeless can also be found in Los Angeles, Seattle, San Diego, San Francisco, Boston, and Las Vegas (Elliott, 2017), all cities with significant tourism. It is at such locations that tourists observe, perceive, and interact the most.

To outsiders, it seems that "the homeless" form a part of American identity and perceive that living on the street is accepted, and “normalised”.

The Homeless in San Francisco. 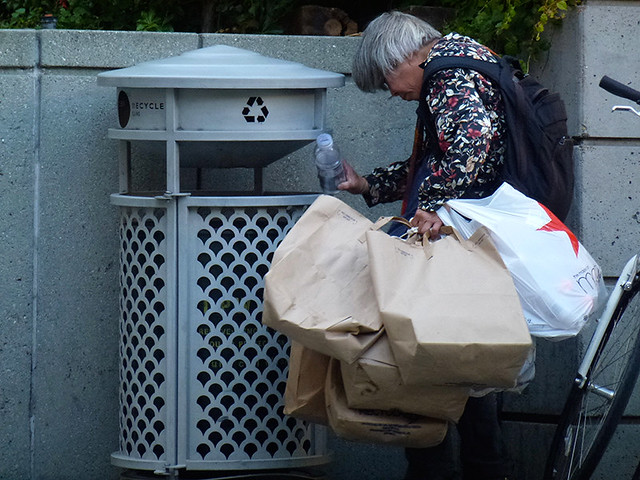 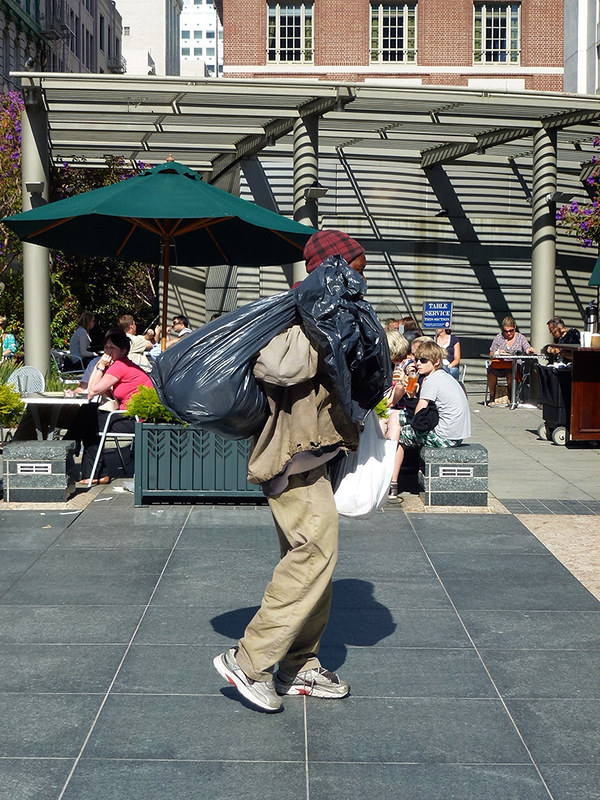 Homelessness seems to have a greater public face in San Francisco. With the effects of the world recession in 2008 still continuing and likely to into the future, travellers are confronted with their presence at every street corner. Central San Francisco is compact and the homeless concentrate themselves in or near the centre, with their density diminishing towards the outer sections of the city.

It doesn't take many walks about the city, observing chess tournaments, listening to blues and jazz music, or reading classic literature, to realize that homelessness doesn't always result from a set of simple circumstances. While there are homeless people that have struggled throughout life, there are also those that have had a good education, that have had respectable and perhaps a highly paid job, and have fallen on hard times.

Another observation is the number of homeless that have fallen through the cracks of the social welfare system, and have some mental wellness issues. Whether the issues were present before they became homeless or whether it has been caused by subsequent use of cheap alcohol or drugs can't be known, but it is clear that such cases are only able to function at a very basic level as a result.

San Franciscans themselves, appear to be tolerant of the homeless, and move about as though they are just a part of the streetscape. Police mostly stroll around with little interest, and only become involved if there is a dispute or fight. For their part, the homeless go about their own lives oblivious of the rest of the world around them. To visitors, the experience is somewhat surreal, as it is an environment to which not many would have been exposed to.

Interaction between Travellers and the Homeless in San Francisco 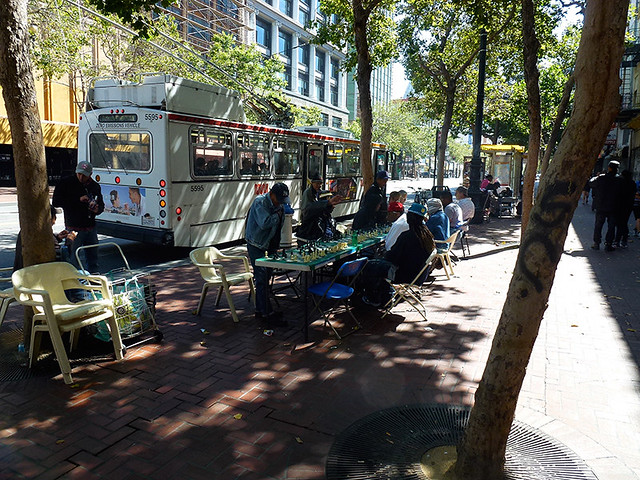 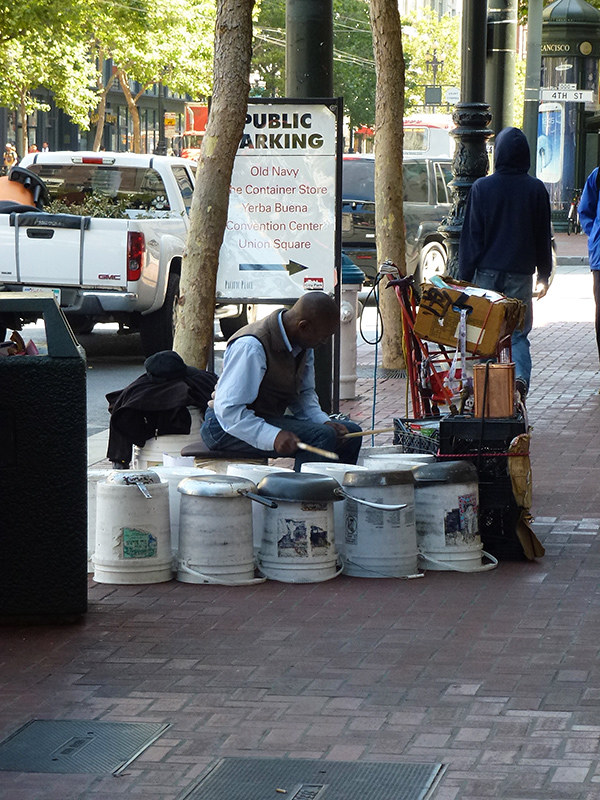 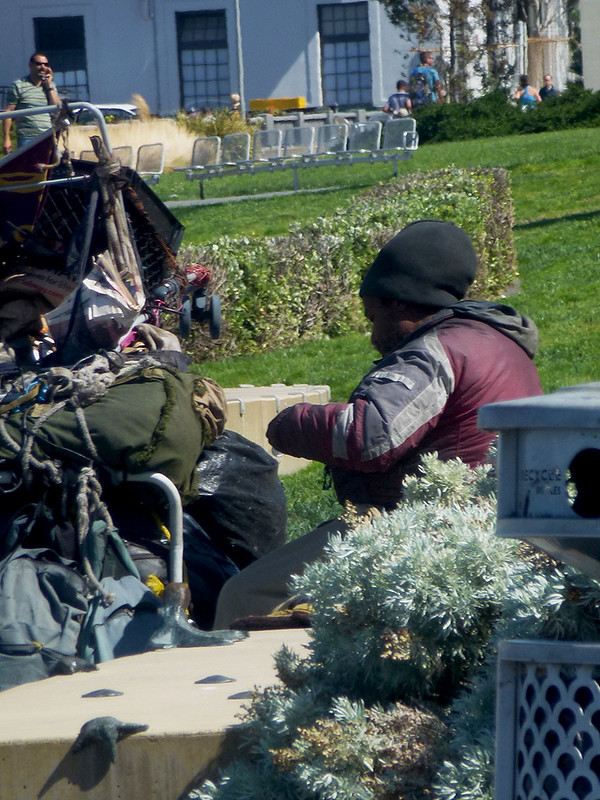 For travellers, the homeless are present in a number of ways. Sleeping along the street is common, along with public parks and public squares such as the quieter parts of union square. Often, when travellers are up and about walking around the city early in the morning, the homeless are seemingly able to be sound asleep despite the busy and noisy commuter traffic. It's not until later in the day that the homeless become active, and that's when you see chess playing with much enthusiasm, reading and quite a lot of discussion amongst some.

Travellers do need to take care however, particularly in regard to photo opportunities. Leaving aside specific privacy issues, there are many great photo shots that can be taken at a distance without incurring dramatic privacy concerns. One occasion comes to mind. Being intrigued by a long series of tables on the pavement, a number of games of chess were taking place. At the optimum moment one or two people suddenly raised their jackets over their heads, obviously not wanting to be photographed. Subsequent menacing looks had the photographer scuttling away, constantly looking behind themselves in case they were being followed. This is perhaps indicative that criminal elements are also present amongst the general homeless population.

For the most part, the homeless keep to themselves, some sit and beg, others travel around the city with their supermarket trolleys, full of all their possessions, clothes, makeshift housing and sleeping, and the collection of bottles that they scrounge out of rubbish bins, along with scraps of food and drink. This would account for why so many congregate around the centre city, with the Mecca of office workers and tourists who eat and drink on the run, leaving a gold mine in goodies left in rubbish bins.

Ther are also other people on the streetscape who fringe on the homeless world, rather than being overtaken by it. Semi-buskers, playing bottles, frying pans or anything that comes to hand; artists doing pavement or parchment drawings; others who have joined the various markets and sell odds and bods to get by.

Being intimidated by the homeless is not really something that comes to mind. There are places and times that travellers would be wise to avoid, and certain parks and plazas are places that are social centres where the homeless congregate and drink cheap liquor, usually at dusk. As always, night-time is a time in any city where travellers should not to take risks, stay on welltrodden paths, and be aware of their surroundings.

A particular memory concering the ploy of an Army VET. 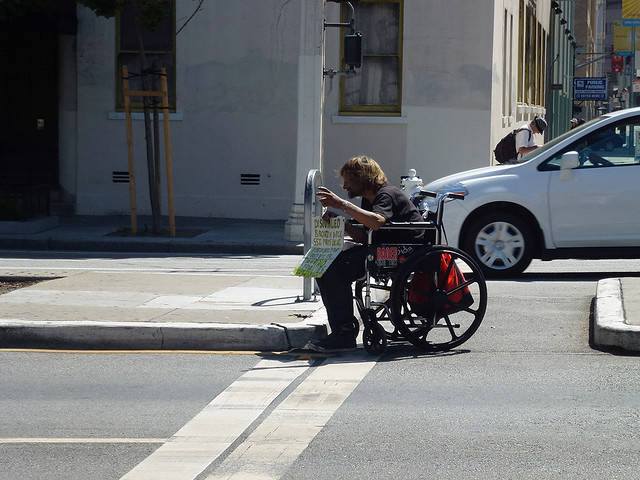 Another side is the few army vets who have either been neglected by the system, or who are perhaps bitter and do not want anything further from the system. Most notable are those in wheelchairs, located in strategic positions, and clear for anyone to see. One which comes to mind is a vet in a wheelchair who had got himself on a barriered median strip at a set of lights on a busy six lane highway. This put him right at window height to the closest stopped car, who he would either shame or gain sympathy from using a number of well rehearsed ploys, and consistently collect money.

"Our" Attitude towards the Homeless. 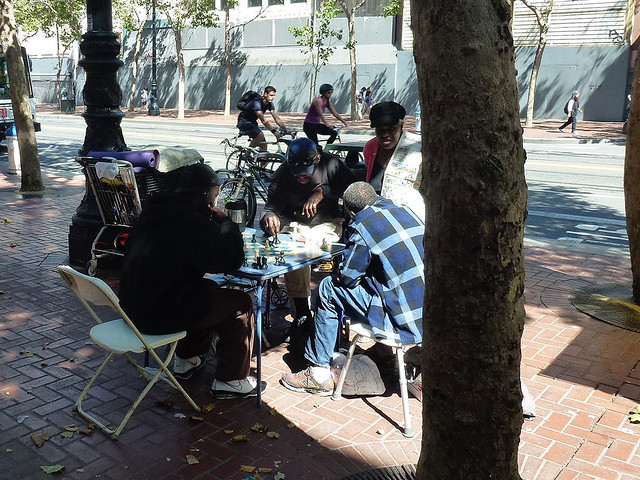 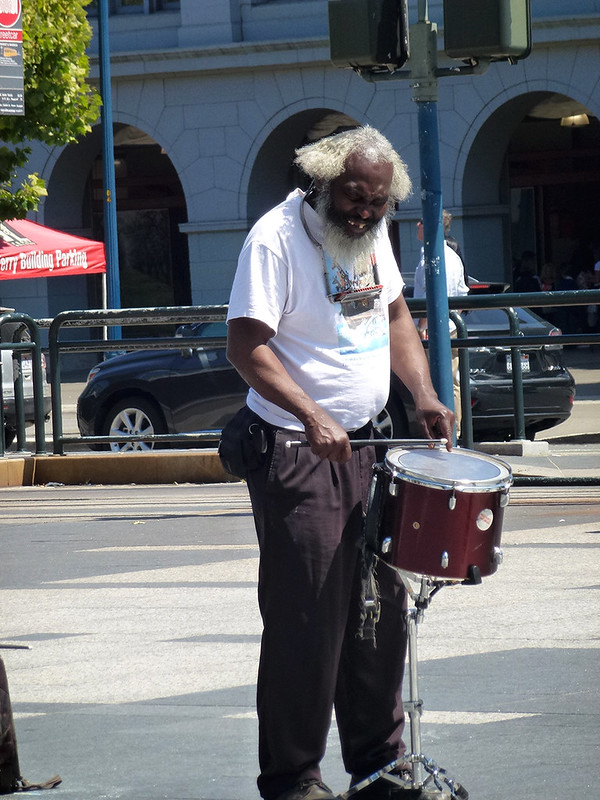 So how do we actually feel about the homeless. While travel provides a very hands-off situation that requires no moral or ethical thought on our own part, the reality of coming face to face with the homeless in real life poses something completely different.

There is a definite sigma attached to the homeless, along with a raft of stereotypical perspectives, that are not easily overcome. Research (Phillips, 2015) indicates

Perhaps, our attitude can be summed up by the fact that in the research, 82% of respondents indicated that they would be willing to volunteer in social programs to help the homeless. However, a subsequent follow-up showed that less than 44% actually carried through on that stated willingness. In the end, would we be any different ?

Arias M, (2014) How Barcelona’s homeless are guiding tourists round the city’s underbelly, The Guardian International Edition, retrieved May 2018, [https://www.theguardian.com/cities/2014/oct/22/barcelona-homeless-guides-tourists-city-underbelly-hidden-tours]

Chamie J, (2017) As Cities Grow Worldwide, So Do the Numbers of Homeless.,
YaleGlobal Online, retrieved May 2018 [https://yaleglobal.yale.edu/]

Elliot M, (2017) Poverty : 10 Cities with the Most Homeless People,
CultureCheapSheet, retrieved May 2018 [https://www.cheatsheet.com/culture/cities-with-the-most-homeless-people.html/?a=viewall]

Gentleman A, (2006) Slum tours : a day trip too far ?, The Guardian International Edition, retrieved May 2018, [https://www.theguardian.com/travel/2006/may/07/delhi.india.ethicalliving]