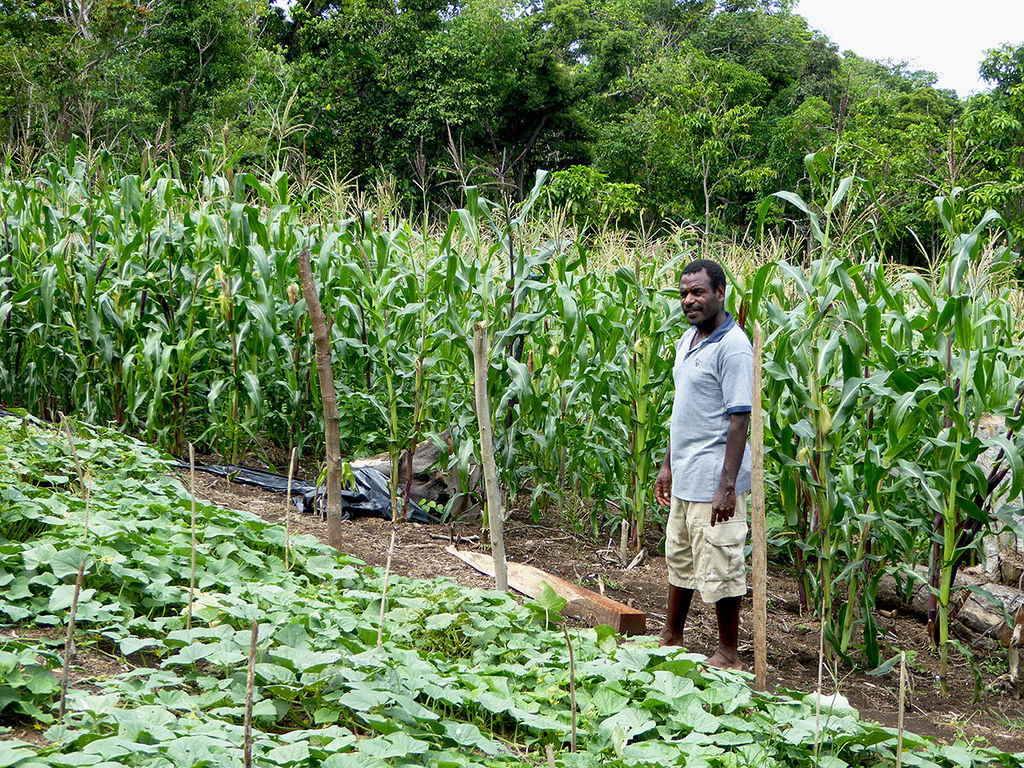 Its complicated, but it’s so easy to muddy the waters around factors that have lead to the fragility of pacific populations. In fact, its only when catastrophes overwhelm island nations that questions are even asked about their apparent lack of resilience. In a world where political resolve seeks to deny the existence of climate change, little or no connection is made to increasing ferocity of weather events within the south-west pacific, and the level of destruction that is occurring. In the meantime global stakeholders sit around wringing their hands, pointing their fingers at each other. This article provides background to the change manifested by Cyclonic impacts due in part by climate change, and a case study of a project to lessen their effects on remote Melanesian islands.

The Past : Dominated by a Prolonged Period Without Adversity. 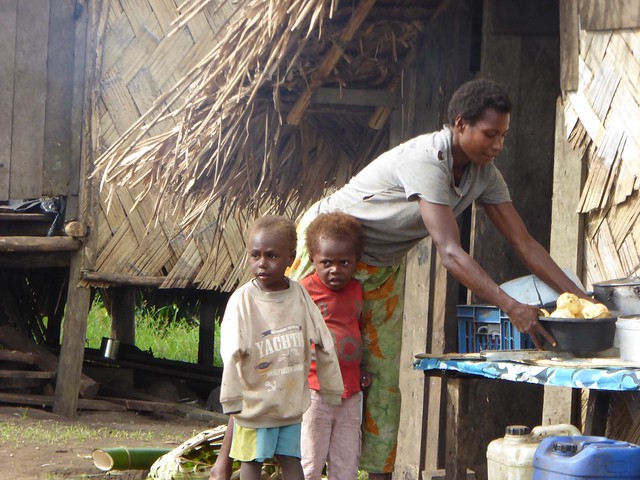 Despite rapid urbanisation, most people in the pacific live on remote islands and survive through subsistence farming and fishing. In the past, most island populations existed in harmony with their surroundings and given a relatively stable environment, communities retained a balance with nature that was sustainable over a considerable timeframe. Until recently, the climate in the Pacific for the past 3000 years has been marked by sustained continuity and a distinct lack of extremity swings. Compared to subsistence societies elsewhere around the globe, life has had an air of sufficiency, where there may have been periods of less and other periods of plenty, but always within a state of adequacy (Nunn, 2012 ). Food systems have not been required to develop any complexity to cope with adversity.

Cyclones : What Pacific Nations are Affected and by How Much ? 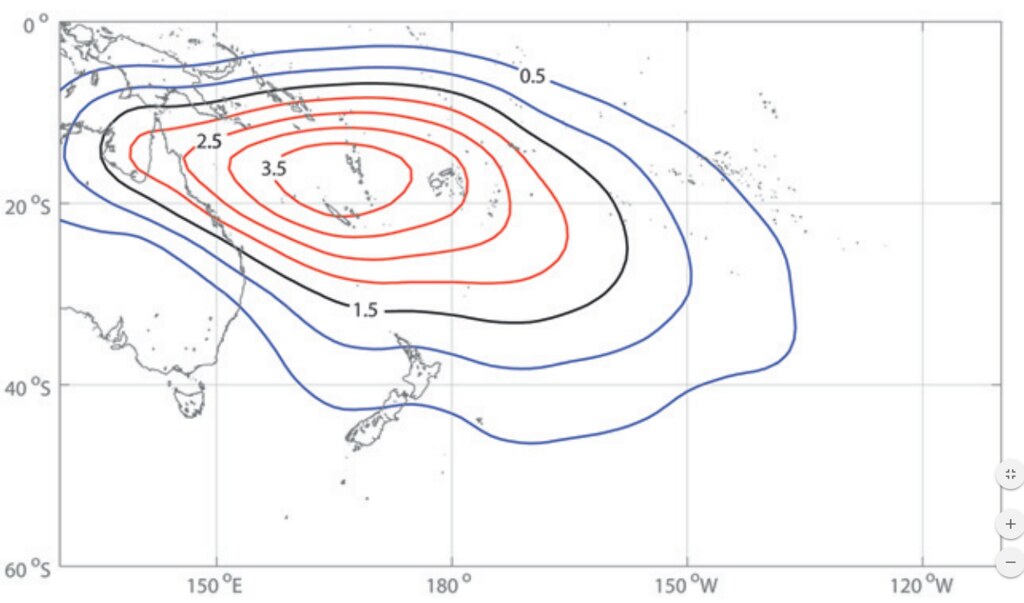 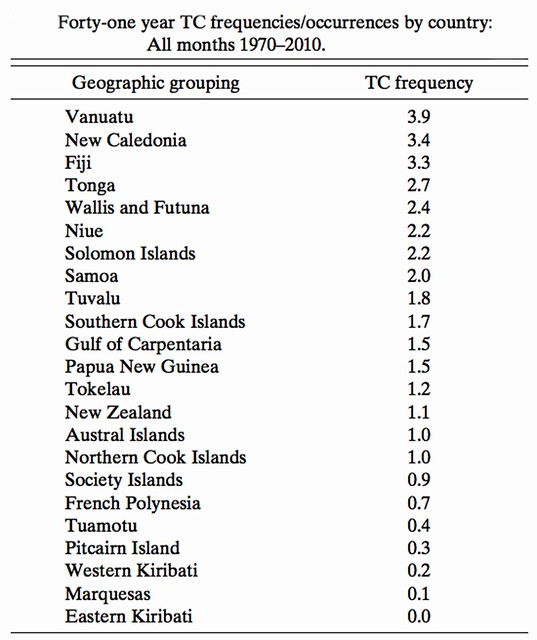 The most favourable conditions for a cyclone to occur is when there are very warm temperatures at the oceans surface, while there is a strong temperature gradient through the atmosphere. Climate change has the affect of warming the atmosphere and it is believed that this will affect cyclonic action in two differing ways (Climate Council, 2017) :

A complicating effect that impacts global weather is the El Nino - Southern Oscillation, which makes actual cyclone formation less predictable, and their patterns more erratic. The El Nino / El Nina effects are concerned with the warming cooling effects of the ocean, the Southern Oscillation is an atmospheric effect, and the combination is the coupling between them. In recent years the consequences have been that it appears that many more cyclones have occurred, but in actuality, it is more correct to think that many more destructive cyclone have occurred ( with the overall number of cyclones not changing much).

The Outside World : We have downgraded the Pacific’s ability to cope. 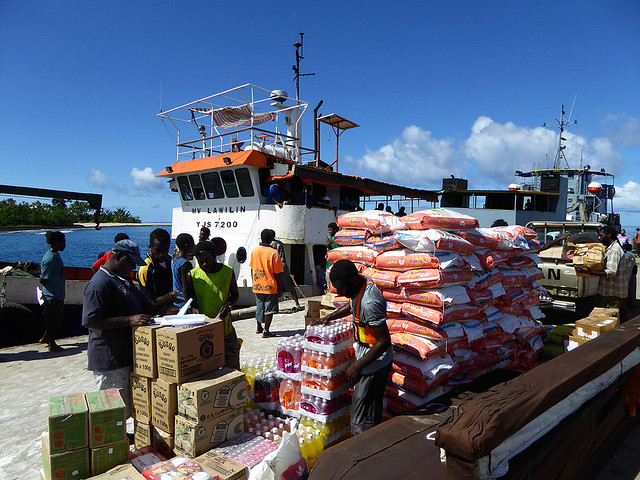 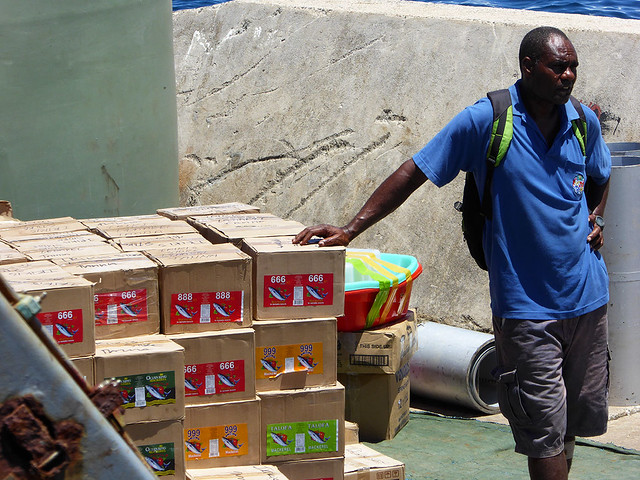 Previous to outside influence, a South Pacific way of life was both idyllic and harsh at the same time, allowed pacific people to develop a deeply engrained culture that permeated every aspect of their being. From time to time natural catastrophes occurred that had dire consequences to both their population and at times their very existence. Adherence to their tradition way of life in these situations helped them to not only survive, but to thrive.

Over the last 100 years, increased globalisation has been a mixed blessing, with more frequent ferry services bringing unfiltered and unnecessary western goods, resulting in distortions to traditional lifestyles. Outside influence has had a dramatic affect on the way of life of island populations, particularly the introduction of imported goods and the necessity to have a monetary system to purchase such goods. (Nunn, 2012 ) :

“changing from traditional interactions with their environments, that were generally more sustainable by virtue of being more adaptable, to interactions that are less sustainable and more dependent on, outside, even globalised, forces.” programs.

Traditional Pacific Crops : It is Imperative that these are supplemented. 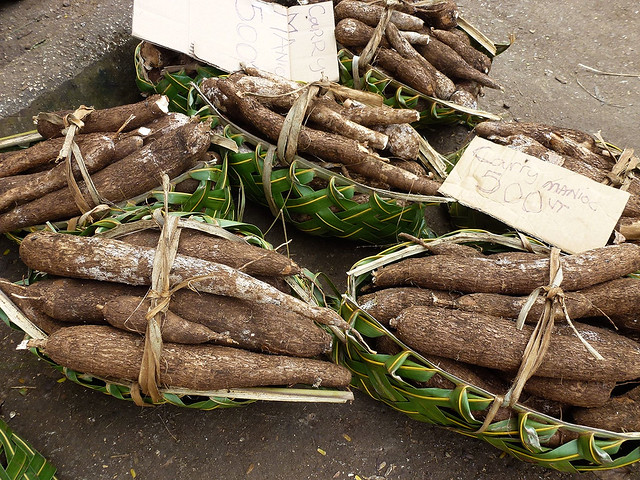 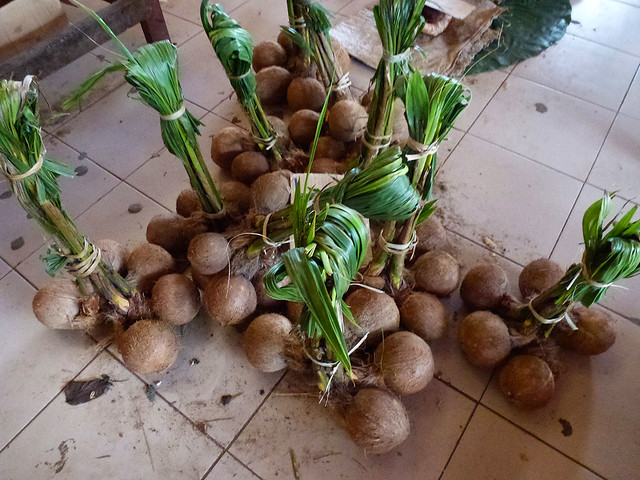 Approximately 80% Ni-Vanuatuans of working age, are employed in subsistence farming, contributing 43% of the total agricultural production (FAO profile). Societal conventions, and norms in Melanesia surround the production of the traditional starchy crops of yams, taro, tapioca, banana (cooking), and manioc, and much of what is embodied in “kastom” surrounds the nature of these vegetables, and their planting cycles. Further, a triangular relationship of dependence between : the people, the land, and “kastom” is firmly ingrained within the makeup of Ni-Vanuatuan people . It involves established traditions that have developed over time, and has formed a mechanism that has allowed the people to survive and flourish in the past. The “ways” are so intrinsic, that any attempts no matter how benevolent, to introduce new and helpful agriculture, and crops have generally been met with disregard. 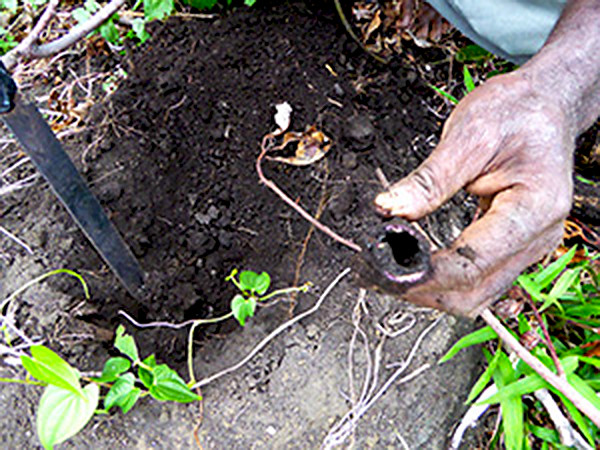 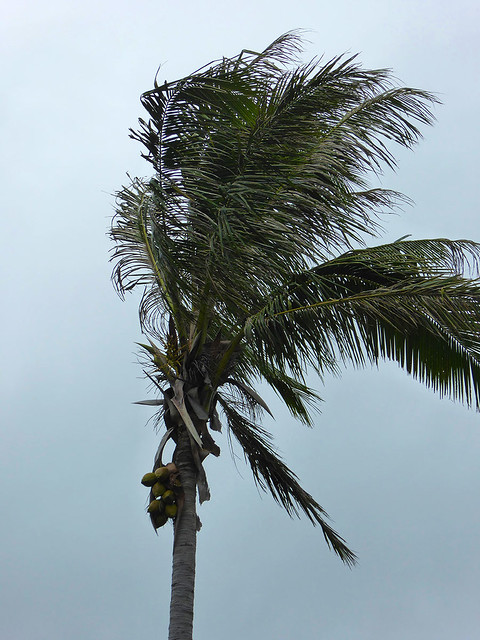 The issue with traditional starchy crops is that they are susceptible to wind and storm shock and for a variety of reasons become quickly inedible. In short, they have little or no resilience to cyclonic effects.

Added to this, is the fact that most of the crops associated with Pacific peoples, particularly Melanesians, take a year to develop to harvest, making food resilience extremely fragile. Melanesian society has developed a substantive and deeply spiritual culture around growing and harvesting food crops, which form a part of their very identity. It is not possible, nor desirable to break this fabric surrounding their way of life. Instead, this array of traditional foods need to be supplemented.

Crops such as yams and taro have a full yearly growing cycle and have distinct periods where they are susceptible to outside forces. Banana plants have similar characteristics. Destruction of all these crops require at least a full year for replacement harvests to occur. Consequences to coconut palms are more drastic, and if the heads of these trees are damaged, trees may never recover or take four years to grow new coconuts.

Cyclone Pam has changed everything. The devastation caused has caused significant hardship, and the survival of island populations has only happened through the distribution of rice and other imported food. Recovery back to fully functioning communities has been slow and not without sorrow. If there was a Cyclone Pam every year, or perhaps twice a year, would the international community be continually forthcoming with aid ?

A means of increasing food security, is to introduce vegetables that are more resilient to extreme events, including the drought conditions that occur subsequent to cyclones. After Pam, a high percentage of foliage was stripped from the surrounding tropical Flora, and as a consequence, a greater amount of ground exposed to the sun causing significantly higher evaporation. The subsequent dry conditions created difficult growing conditions for village gardens, resulting in a high failure rate for new plantings. This was compounded by “El Nino” weather patterns which substantially diminished rainfall from the traditional wet season, exacerbating crop failures. 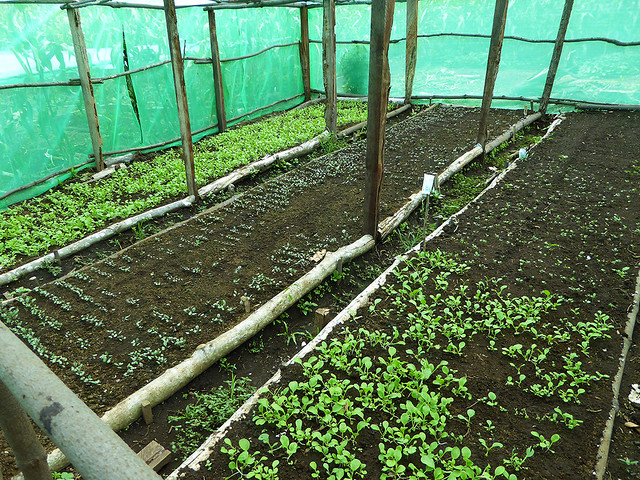 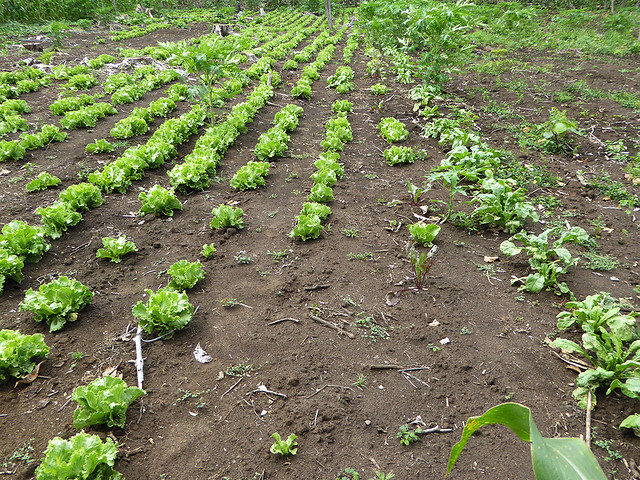 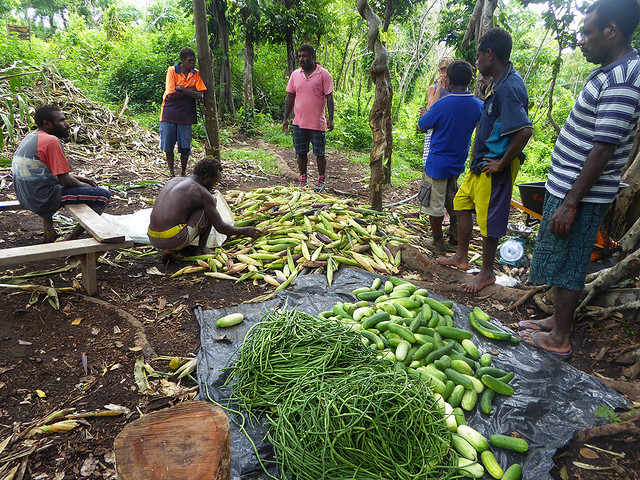 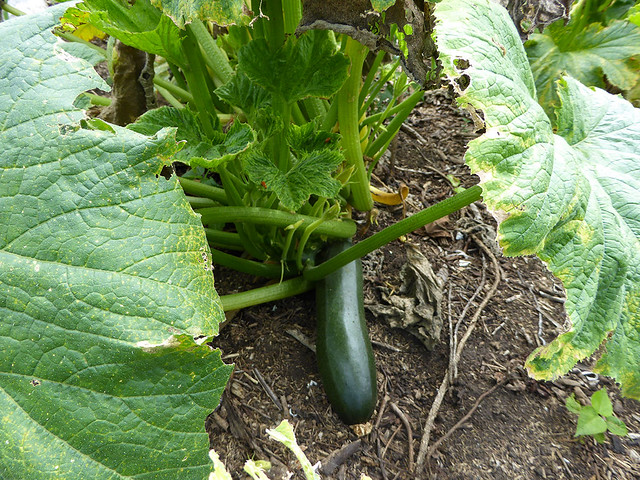 Isso (Esso) Kapum, from the central region of Middlebush on Tanna Island, formulated the concept of creating a large plantation of drought resistant, quick growing vegetable crops, irrigated from a local spring, to help alleviate the suffering in areas of Tanna that have been hit hardest. The paramount chief of the area sanctioned the use of tribal land for the plantation in close proximity to a dependable underground spring source. The concept was to test traditional food practices, by moving peoples diets somewhat away from the less adaptable starchy stables, and more towards a more diverse mix of vegetables. Corn, zucchini and marrow, lettuce, carrots, large white radish (similar to white turnip), bok choy, beans and kumala were all trialed, and found to be able to be successfully grown.

The project was faced with skepticism along two fronts ; that uptake of the vegetables by local populations would be marginal, and that a plantation styled horticulture venture would not succeed as it had never been successful in the past. The various NGO’s that the concept was put to were not initally enthusiastic. Despite this, the project was proceeded with and soon supported by one NGO who understood and believed in what was trying to be accomplished. “Nasituan”, through the belief of Jeffry Lava provided water storage tanks, and paid for some labour, and seedlings. An initial area of eight hectares was clear felled and the trunks and branches piled up around the proposed cultivation area in a protective barrier against marauding pigs.

A starting planting of one and a half hectares was commenced, and it was soon recognized that the plantation concept had huge potential, and from that point on, gained rapid support. “CARE” International came on board and provided additional support for workers on the site and extra resources, while “NZAid” pledged an irrigation system. A manager was appointed for the plantation, organizing the daily work schedules, planting schedules, and distribution of produce to the various villages. “Nasiituan” advertised for a trained agricultural officer to provide technical assistance and to co-ordinate and supervise the planting of suitable vegetables, providing the skills associated with large scale horticultural operations. Mr Daniel Nalin was bought on board, and was invaluable in disseminating his knowledge to the working crew and also neighbouring villages who support the project.

The project was started in December 2015, some eight months after Cyclone Pam, and 2 months later the project had already commenced distributing vegetables, providing 2,000 kg of vegetables to needy villages. As the produce was collected, the plots were made ready for the next plantings, so that a constant supply was maintained and seasonality minimized. A mix of vegetables was a key aspect, with quick growing vegetables such as bok choy used, which could be turned around in as little as three weeks.

The Project : Evaluation and Review. 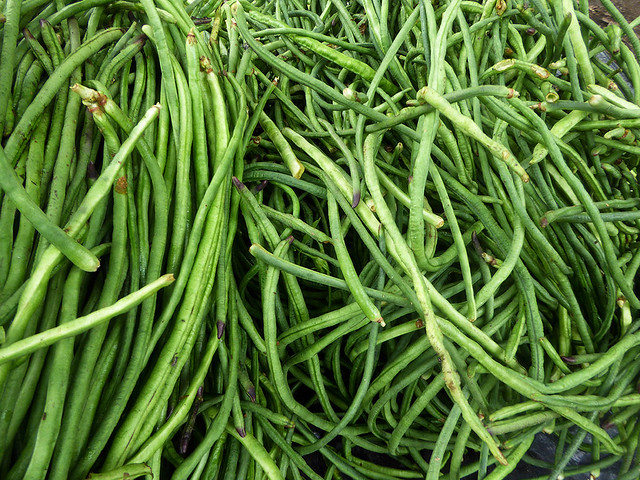 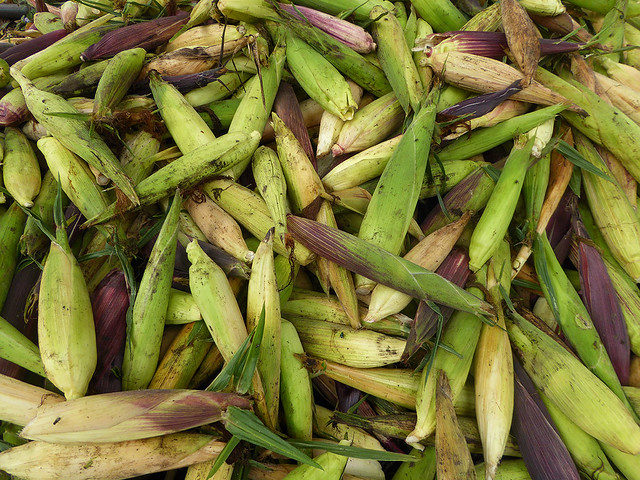 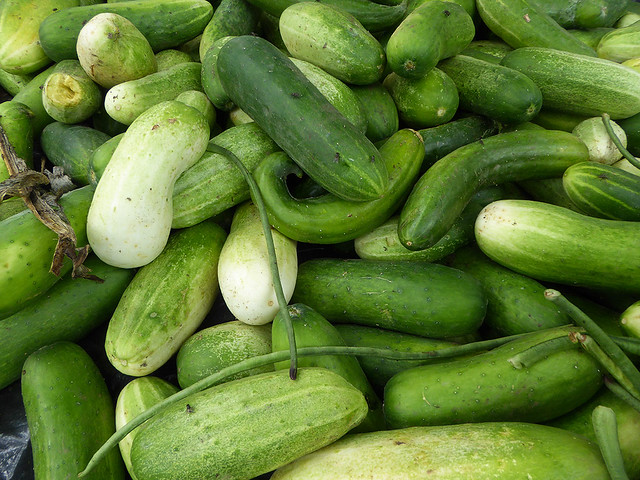 So what has happened since the project was implemented?

The project was located in a location that possessed fertile soils, a guaranteed source of irrigation from naturally occurring springs, and in a relatively sheltered position from adverse weather. However, support for the project was put in place for one year, and while this ensured its success in the aftermath of Cyclone Pam, it was never more than tenuous support for a possible prototypical community implementation.

What about acceptance from Tannese in regard to the modification of their diet ? It takes a severe shock to change ingrained societal practices, and the combined effect of Cyclone Pam and a subsequent drought later in 2015, certainly placed enormous stresses on food pathways of villages. Local populations proved more willing to try different food types and even though existing cooking methods were not totally suitable, acceptance by populations appeared to be favourable.

However, without any longer-term follow up programs put in place to encourage local people to change their diet and integrate the newer vegetable crops into their way of life permanently, the implementation has waned. Adaption takes time, and deep-seated habits within communities are difficult to change. Communities liked the new foods well enough, but simply reverted to their traditional food when they became available again a year or so later. Problems around getting the produce to the various villages proved costly, and vague promises for improvements to the local road infrastructure simply were not followed up on. Further, help in securing a reliable solid base of ongoing end users was not provided. It is now three years on since cyclone pam, and support for the plantation has steadily declined as each year passes. Unfortunately, the same development agencies will question the project’s state of readiness when it is next required, and its ability to produce food, when the next category five cyclone strikes the island. Is it a case of another project put into the too hard basket ?