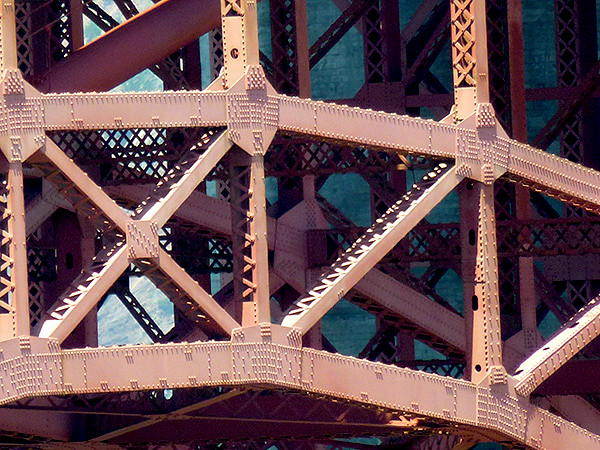 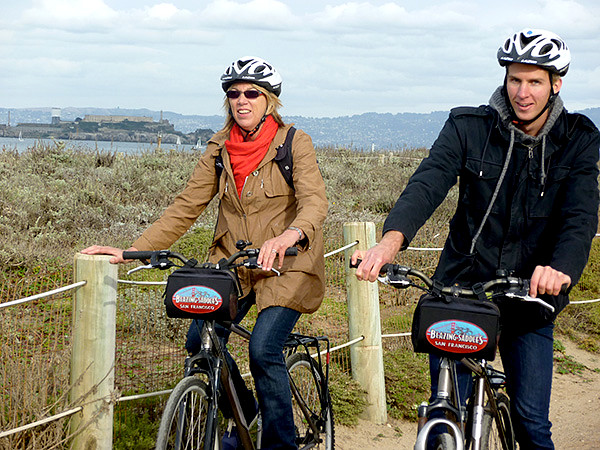 Biking the Bridge can take a little as three hours or so (one way) or the whole day, depending on what you are wanting to get out of it. The actual time depends on whether you bike there any back or catch the ferry at Sausalito. Most catch the ferry and if doing the return trip you are beset with the almost one way traffic coming at you. Those who just want to tick off their bucket list of the 100 top things to see and do are able to do that if they want to be single-minded about it, however, there is a lot along the way that is both interesting an integral part of San Francisco's history, that stopping to investigate only enhances the trip.

Best Time of Year to Bike . 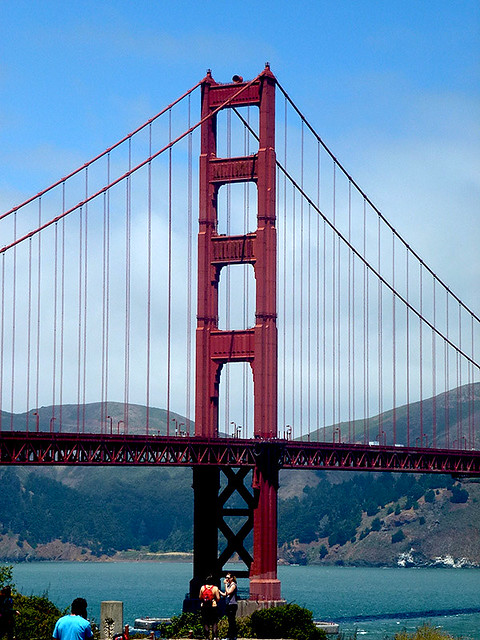 Probably there is no right or wrong time of year to ride the bridge. In the heat of mid-summer, it can get a bit hot and at other times of the year, the fog can obscure your sightings of the bridge. However a part of the appeal is actually doing the trip itself, and although it is not overly difficult it does have enough challenges for the average person to mark it down as both an experience and an achievement. We have done the ride both in July and in November and found both times enjoyable - even in July there was a fairly cool breeze which certainly put a chill in the air a times.

It is November, late autumn when the temperatures vary between five and twelve degrees and where each afternoon invariable seems to end in drizzle or rain showers, even when the day starts out with a blue sky and brilliant sunshine. However, despite this the number of Locals and tourists alike who take to the pedestrian and bike lane commencing at Pier 39 (although bike hire places occur all along downtown) and is truly astounding. Young and old, experienced and novice take the three hour-long sojourn around the San Francisco Bay, over the Golden Gate Bridge and down into Sausalito and return by Ferry. 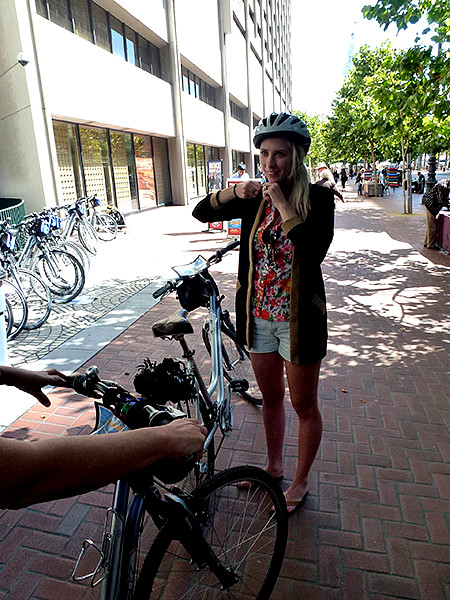 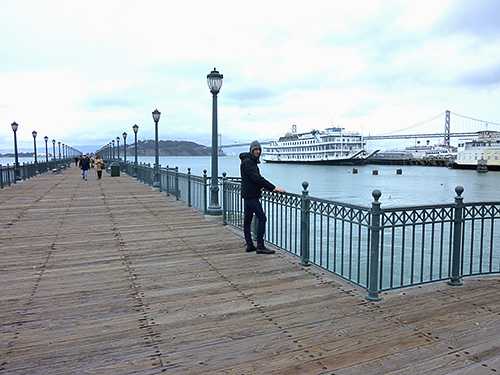 The bridge is situated immediately inside the habour heads symbolizing a gateway to what lies beyond. Travelling across the bridge, excellent views of the harbour entrance and the sea are obtained, and it's imposing presence is amplified by being situated in a steep and rugged coastline.

There is a constant breeze, which at this time of the year is understandably cold, but properly clothed, does not dampen the spirit or the numbers of people heading off. The main difference to the warmer times of the year is that cyclists start later in the day.

All bikes generally come with a map of the bike circuit attached to the handlebars. Despite this, the first section makes its way through the Fishermans Wharf shopping area, which can be fairly busy along the main street and bikers have to be careful around normal traffic, but also the tram lines that go up the road. the area has a reputation for seafood and many large restaurants and smaller seafood street stalls line either side. 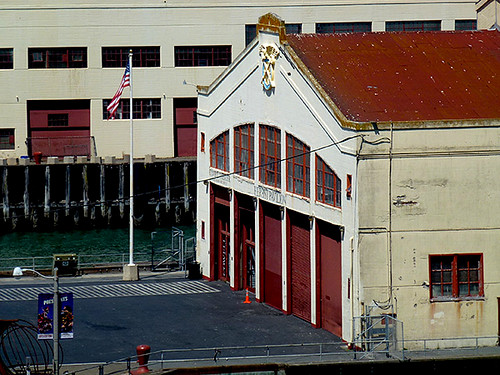 It's not long however before you take a turn and head along the coast around the small but picturesque Aquatic Park beside a small sweeping bay, with the old Ghirardelli buildings now transformed into Ghirardelli Square, a tourist attraction, located on a hill just above. A short steep section of hill has you climbing to the top of a wooded green space overlooking Fort Mason, now giving the appearance of a group of disused military warehouses, with office and Personnel housing dotted nearby. This belies its place in history as one of the busiest entry ports into America at the heyday of its immigration influx. The incoming Chinese and Japanese immigrants would establish their renowned sections of the city - Chinatown, and Japantown. Chinatown especially, developed into one of the largest and busiest Chinese commercial and residential districts in America.

Biking down the pathway from the reserve above Fort Mason, the trial quickly skirts a Marina and you find yourself beside a long flat coastal parkland, called Marina Green. The street beside (aptly called Marina Boulevard) it has substantial housing overlooking the park and sea, and obviously a more "well to do" area. the scene is one which you would associate more with a quiet seaside town than that of a suburb immediately adjacent to the heart of San Francisco. The riding is pleasant, with the start of the outlook to come beginning to reveal itself. 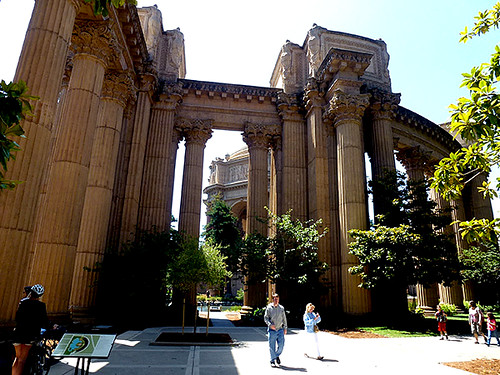 At the far end of Marina Green lies the exposition buildings, which was constructed soon after the earthquake and fire which devastated San Francisco in 1905. It was intended to be a symbol of the cities resilience and was designed in a way which reaffirmed its position in the world. A walk through the area is well worth it as a park-like setting has been created, which is landscaped around massive outdoor structures which appear to have come straight out of Roman or Greek times. It has been done with a fair amount of thought and taste, is not overly done, and provides a contrast to everything else in the locality. It seems surreal, but is not a glitzy American construction (that age came later in history) and runs parallel with the architectural theme manifesting itself throughout the civic centre area - that portraying images of the Roman Empire. It appeared important to the fathers of America, that they were creating an empire which could and was comparable to that of the great empires of the past. The large crescent-shaped building which shares the grounds is the Exploratorium, a major Museum, and attraction in itself. 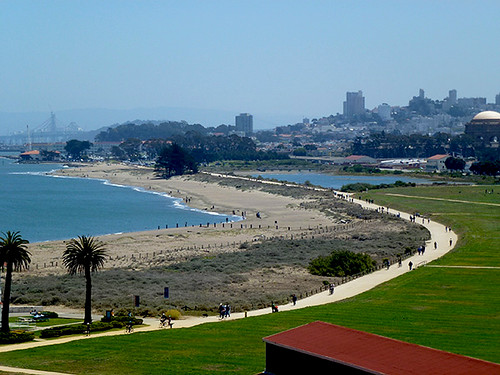 Back on the coast, the Golden Gate Promenade, passes through a long expanse of sandy beach and dune area, which is a popular beach (non-surf) for San Franciscans, during hot summer months (but not November). The sand, however, is not an inviting fine white sand which most popular beaches possess, but a heavier, coarser gray/brown sand more common in nature reserves. Certainly, in November, few people are about and the beach is left to the birdlife which abounds around the area.

Moving on, you pass through Chrissy fields, an extensive flat area, which during earlier times constituted a significant military airbase. Immediately past the old hangers, the ground rises up into the Presidio, one of the two major Park reserves in San Francisco (the other being Golden Gate Park), and you are able to see the ramparts of the Golden Gate Bridge itself. The glimpses provide a sense of anticipation as the bridge only reveals itself part by part until you get much closer, and this only enhances the experience.

Climbing the Hill through The Presidio. 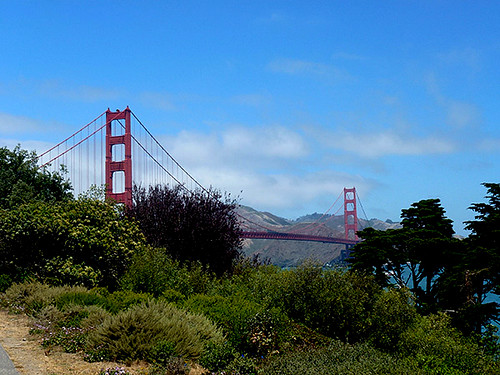 It is here, at a number of strategic vantage points located, where the bridge can be seen from a variety of perspectives. Even at this distance the configuration and lines of the bridge are clearly delineated. And that is probably why the bridge captures your imagination - the clean symmetry of the structure is uncluttered in is appearance and possesses a near perfect scale and shape. It is not that the bridge is beautiful in an artistic sense, but that it displays a certain strength and engineering achievement, holding those who view it in awe. For arriving immigrants from the west, the bridge would have been a powerful symbol conjuring up images of a modern day Roman Empire. Indeed choosing the bridge to portray this, parallels the great engineering feats for which the Roman empire was renowned for, and the architects who designed the bridge clearly excelled in there brief.

Moving on, the view of the bridge is lost, and bikers begin to concentrate on the pathway which winds itself up to the approach to the bridge. The fact that the bridge is not constantly in view is one of the reasons for the popularity and appeal of the ride. Along the way the bridge pops into view and then disappears, only to reappear further on with a different perspective or look. If it was always in view, these differences would be missed or glossed over.

Final Approach to the Bridge. 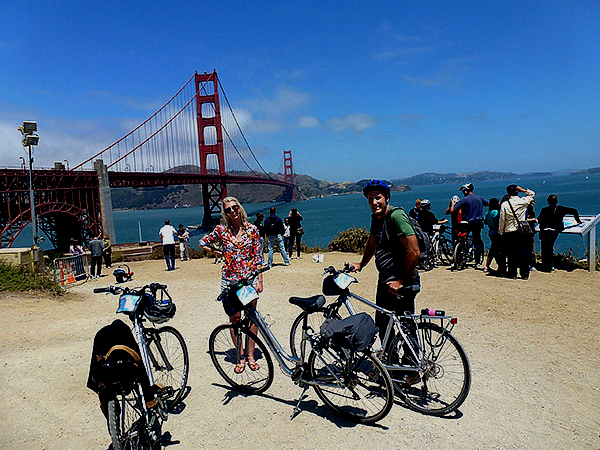 The final approach provides a great view of the detail and construction of the approaching ramparts, where the composite truss shapes become highlighted and the immensity of carrying out the bridges construction hits onlookers. The size of the bridge also becomes truly apparent, which only adds to the admiration which you feel towards its construction. This is not a modern day bridge which hides signs of its construction within its concrete or steel fabrication. It is a structure which has been time stamped by discrete steel plates and millions of large steel rivets.

After the build up getting to the bridge, the entrance onto the bridge, is sudden - One minute you are climbing up the path, around a bend and there you are biking along its length.  ...........