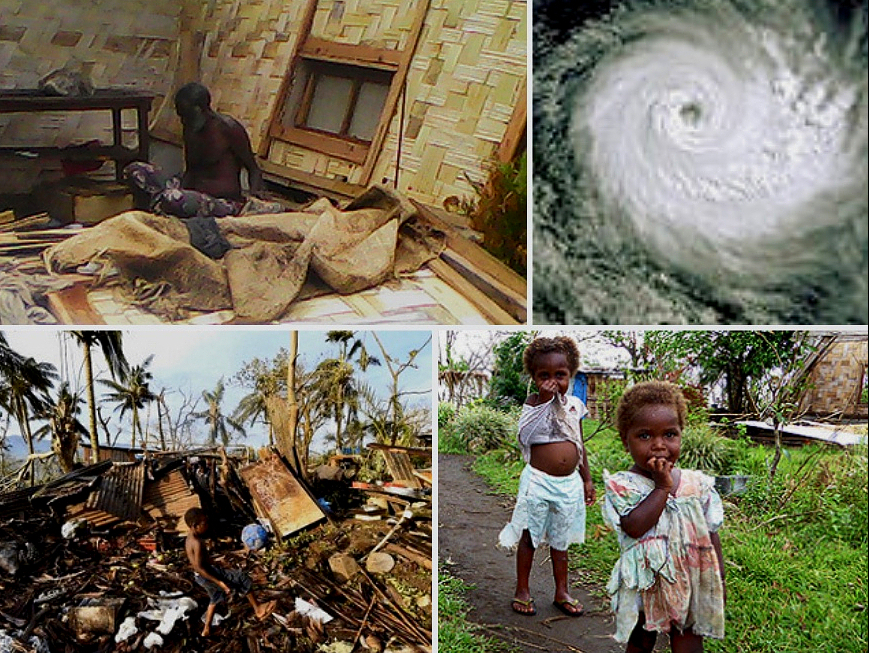 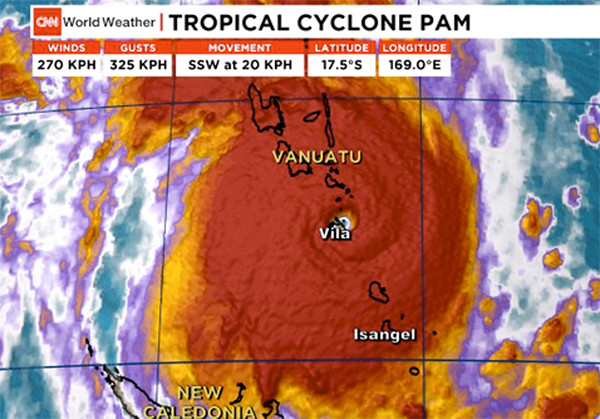 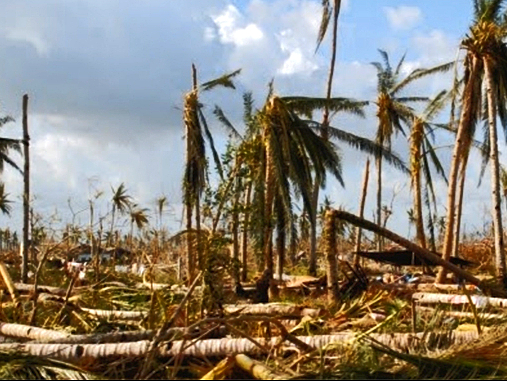 For those living in temperate climates Cyclones seem to be so distant to our reality that, who really cared. Despite any thoughts that we may have had, it's certainly true for New Zealanders, and probably Australians living in New South Wales and Victoria as well. Cyclone Pam was the first of the Pacific "mega-cyclones" that has changed all that, and even then it's only in hindsight. At the time it was considered to be one of those rare freak catastrophes that hit only once in a thousand years. Since then there has been at least one Category 5 "mega-cyclone" in the Pacific every year since, and even then there is a perception that such things occur over there, and not here.

However, with climate change (for whatever reason), warmer weather has extended southward and so far this summer New Zealand has experienced the aftermath of three major cyclones (with Hola about to pass over the North Island as this is written). Suddenly, Cyclones have manifested their devastation on New Zealand, and they are now very real. Affected communities faced with the massive cost of trying to get back to normality, are asking why aid is being provided to Pacific communities while they are being left to fend for themselves. Further, while design codes in Australia demarcate the limiting extent of cyclones being the New South Wales - Queensland border, it is likely that New South Wales will experience the impact of cyclones in the future.

Cyclone Pam passed over Vanuatu almost three years ago to the day (12-14th March 2015) it is relevant to look again at the Cyclone that commenced the present onslaught of Pacific mega-cyclones. Its impact is still being felt strongly in the islands that it desolated, and a full recovery will not occur until some years into the future. What happens when the next Cyclone impacts these islands ?

Cyclone Pam : Not Just Another Cyclone !

The winds came from the east, and while there had been warnings no-one expected the ferocity and scale of what was about to happen. After all, there had been cyclones before, and everyone had survived ….. right. But this was different, rapidly developing into a the upper range of a Cat 5 Cyclone ( Both Fiji and US means of measurement), this was a weather event that has been unprecedented for decades. That was not the worst of it, Cyclone Pam formed a defined eye approximately 35 km wide with the winds at the perimeter of the eye at the extreme limits. “Weather.com” has reported that Pam was stronger than all but two Atlantic hurricanes of all time (University of Wisconsin). Pacific Island nations have been lucky in the past as the probability of such a cyclone scoring a direct hit has been remote – but not this time. 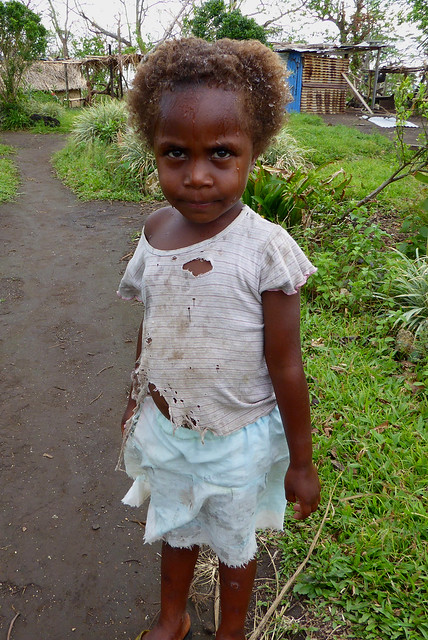 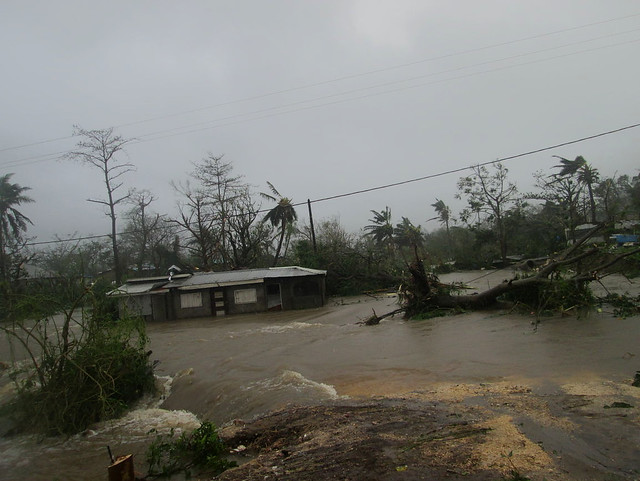 Like a spinning top Cyclone Pam wobbled around, initially eyeing up the island of Efate and Port Vila, and for those that knew, or had heard of the damage caused by Cyclone ‘Uma’ on 5th Feb 1987, the consequences to both life and property that ‘Pam’ represented was beyond comprehension. At the time ‘Ulma’ was noted in the governmental review as being the most destructive cyclone experienced by the country for more than 25 years. ‘Ulma’ developed to the northwest of Santo and travelled south affecting the western side of the island the worst.

Though Cyclone ‘Pam’ lurched around it eventually passed close to but to the east of Efate, and as a consequence Port Vila was somewhat sheltered from its effects. That is hard to take in when you see the total destruction that has occurred on all of Efate, with 80% of all buildings (mainly local housing), being lost and 100% of all green vegetation being stripped.

Tanna Island : Not So Lucky, A Direct Hit. 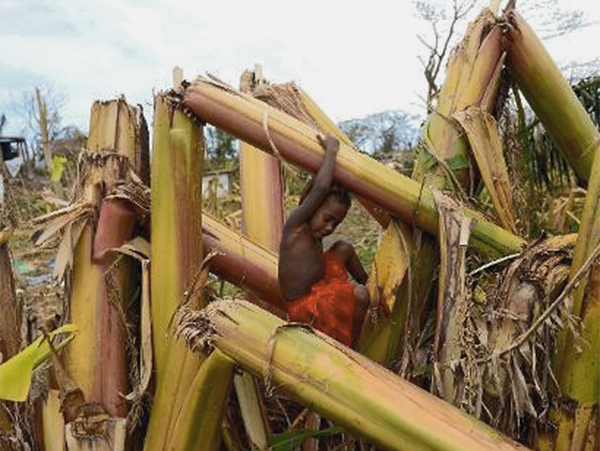 Unfortunately, the worst was yet to come. All forecasts had the cyclone projected on a south easterly curve which would have it passing to the east of Tanna and it was hoped that the curve would sharpen, and the track would take it away from Tanna, and with it the destructive eye. That was not to be the case and it wobbled a couple of more times, placing is actual path just to the west of Tanna, with its eye sweeping over the whole island.

In the Southern Hemisphere, the winds swirl around the eye of a cyclone in a clockwise direction. For Tanna, that meant that as the cyclone travelled down from Efate, the winds began to come in from the east, and strengthened as it approached. Initially, the east coast bore the brunt, and the winds lashed the coastline and intensified as it raced up the escarpment leading to the highlands at Middlebush where most of the coffee is grown. The main centre of Lenakel, the airport, and the major resorts, all situated on the Western coast were somewhat sheltered from this onslaught. The east coast continued to suffer badly as the cyclone continued southwards over the island, as did all of the highlands region. The winds gradually turned north east, then north, and eventual northwest, and with the eye of the cyclone being larger than the entire width of the island, the whole of Tanna was to be devasted. The barrage was to last most of the day.

No Cellphone Towers : Its a News Blackout. 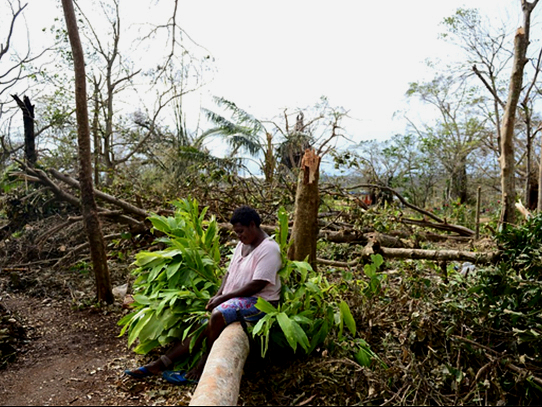 The consequence, is only now beginning to be reported as all the cellphone towers have either been damaged, or their equipment put out of action, and while the cyclone hit on Friday 13th it is only on Tuesday 24th that any substantive News has come out (11 days later). While news reporters have made tentative forays into the area, this has been without any comprehensive reporting, and lacking in any specifics, instead concentrating on the immediacy of the situation and presenting the human face of disaster.

Middlebush, The Highlands Has Been Destroyed. 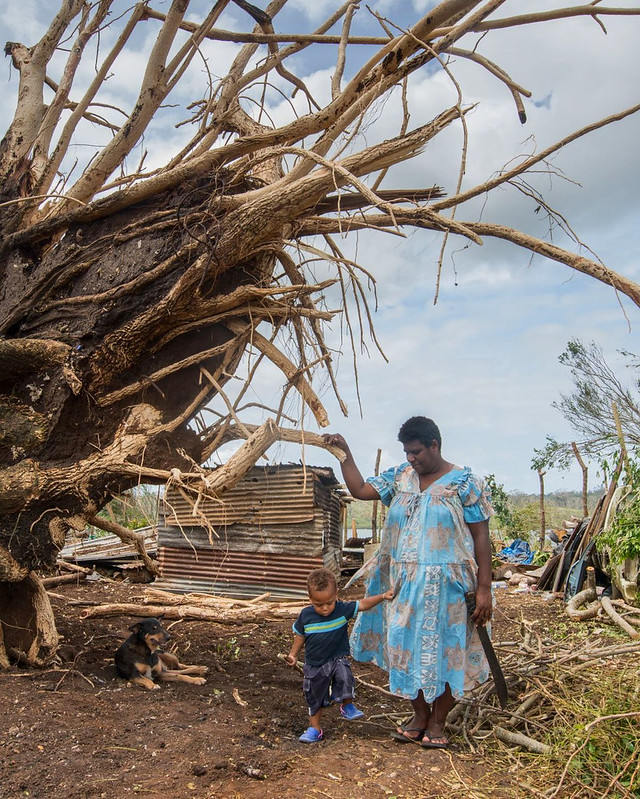 We had been in contact with Esso(Isso) right up until about 12 hours before the worst of the Cyclone hit and, he was well aware of what the consequences could be. As always, his ability to sum up a situation, prioritise and take immediate action to obtain the best outcome kicked in. Rachel and Esso’s buildings (Tanna-Adventures) being on the edge of the high escarpment, along the east coast were particularly vulnerable to the oncoming winds, with their village (Chief Jack’s village) being less threatened. From a personal perspective, I had thought that the rest of Middlebush would suffer less, having substantial trees throughout it with many gigantic Banyan trees scattered throughout, providing extensive ground roughness to slow the winds at ground level, and provide shelter. I was wrong.

The village of Chief Jack has been totally destroyed by the winds, including Chief Jacks House (made of Concrete block), and Esso’s House … all solid construction. All buildings made from traditional material have been scattered to the wind in pieces.

It is a familiar story right across the whole of Middlebush, and with few exceptions all building in the Middlebush area have been destroyed. Unfortunately, that also includes Fetukai School which lies in ruins, even though it too was partially constructed from block. Most trees have either been thrown to the ground, or the lucky ones stripped of their foliage, saving them.

Remarkably, there has been little loss of life, although this is widely reported as being due to the fact that the worst occurred during the Day. For Middllebush, this was in part due to the sound building practices that Jimmy, Rachels brother had incorporated at the nearby “Rural Training Centre”, and ironically the newly constructed “Climate Change Centre”, and along with the main large Training Centre Building were to be the saviour of a good number of the population of Middlbush.

Esso's Story ; What Happened in Middlebush ? 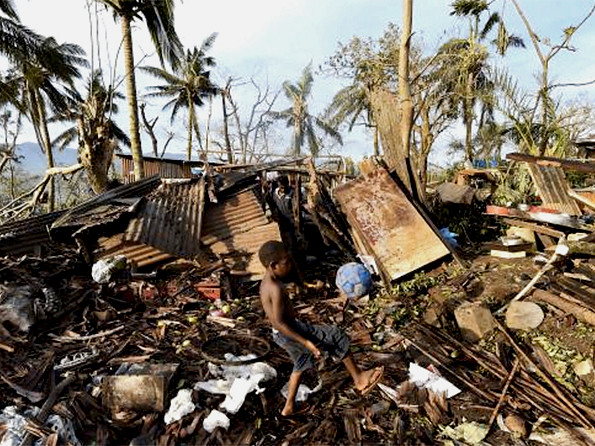 Esso had evacuated his family and his village to the Rural Training Centre, and remarkably at the stage they were the only ones that had headed there. As the ferocity of Cyclone Pam increased and the progressive destruction of all the buildings took place, more and more people made their way to the Centre. It is amazing that there was not a significantly greater number of people injured from flying debri, while making their way. Ultimately, the buildings became fill to overflowing, and in the end it was decided that only the woman and children could remain inside with all the men sheltering around the verandah’s and around the shelter of the buildings themselves.

At the other end of Middlebush, approximately 500 people crowded into the newly constructed Mormon church, and about 300 people in Fetukai Schhol, before it became seriously damaged by the winds.

Once the winds had subsided enough for an initial look around, it was quickly found that without much exception 100% of the Housing had been demolished and almost all of the food. At the moment the amount of shelter and housing available in the area is zero. Iron roofs were flung to the wind and remain scattered far away in the bush, unable to be recovered. Its a similar story for clothes, with many having only the clothes they are wearing left. 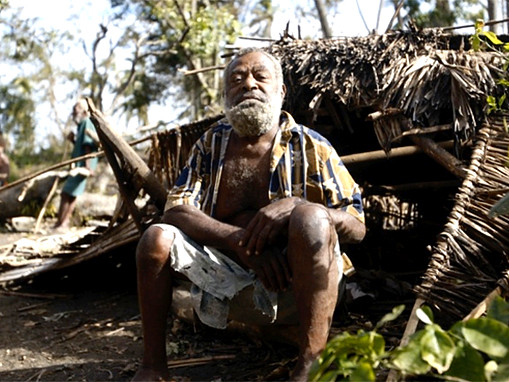 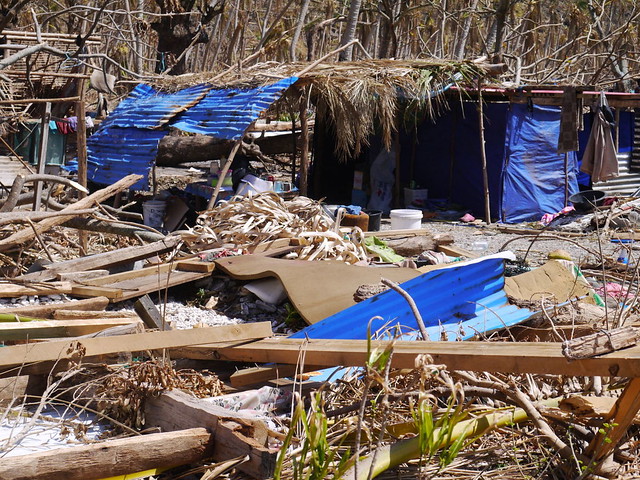 In regard to food – a saviour in past times Taro, unfortunately, is not due for harvest until May, is too immature to eat at the moment and having all foliage stripped off of it, provides nothing for the present. All the coconut trees are down, and obviously the coconuts that are edible have already been gathered and eaten. Right at the moment the last of the bananas are being scavenged and will be exhausted within a day or so.

In regard to water, a good number of these have been contaminated by the culmination of vegetation, blown soil and ash, although at various locations there are creeks and spring-fed rivulets that still survive. Last year there was a major Unicef initiative to install “Ram” pumps, designed in New Zealand, through strategic regions of Middlebush. Unfortunately, without the fore-thought regarding these, they were left and have been destroyed or lost through the ensuing swollen waterways. Clean potable water is either non-existent or minimal and requires walking significant distances over steep terrain to access.

And what about Relief and Aid, the islands of Vanuatu are many, logistics are difficult, and it is becoming a common story throughout Vanuatu ……. but there has been none in Middlebush, and no-one has been known to have been there to assess the situation. Inconclusive, but it is understood that the noise of one or maybe two Hercules transport planes have been heard, perhaps one actually seen. It is difficult to know for certain what is happening, but what is clear is that no aid, or relief has arrived in the Middlebush region of Tanna. 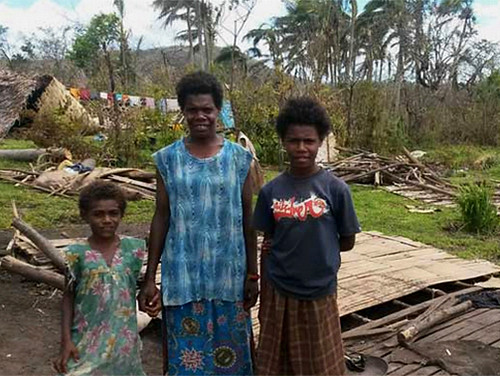 The immediate issue of food, water and shelter has become critical. Unfortunately, putting faith in the major relief agencies has at this stage been ill-founded, as there appears to be no relief, no aid and nobody coming to see what has happened. The weather event has just been so big that the emergency “system” has been overreached ….. to be honest, in any third world nation, there is only a bare bones of a system, it simply cannot be afforded. The worst thing is, that with the passage of time Vanuatu will be forgotten, and something else will be in the news. If that happens there is a risk that an even bigger disaster may unfold.