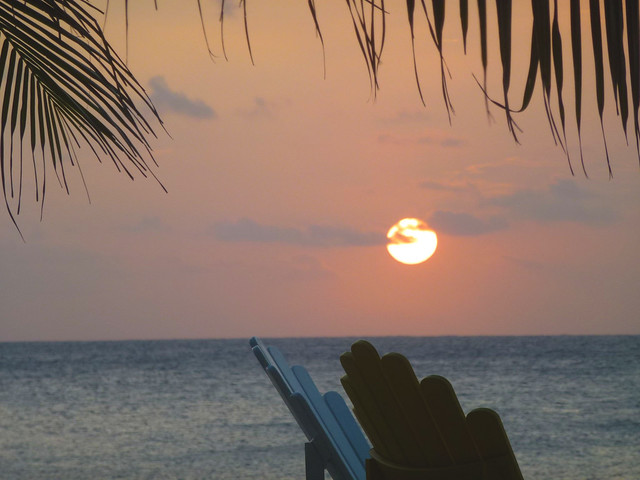 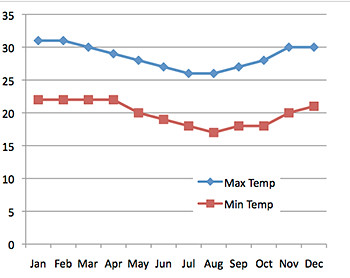 As a generalization, Vanuatu forms a long string of Islands which lie almost vertically and parallel to the lines of longitude and at a latitude of between 13 degrees and 21 degrees south. Being in the tropics weather patterns are relatively even, temperatures relatively high with amble rainfall to ensure lush tropical vegetation to flourish.

Because of its range in latitude, Vanuatu's climate changes from its top (near the equator) to its bottom closer to New Caledonia. The Banks Islands near the top has high temperatures, high humidity, and rainfall all year - whereas Tanna Island in its Southernmost region has quite distinct seasonal changes and where the highlands can be quite cool in the dry season. The island of Efate (the main island where Port Vila is located) lies centrally and accordingly, has distinct seasons, but which are both generally warm all year.

Does Vanuatu have Seasons ? 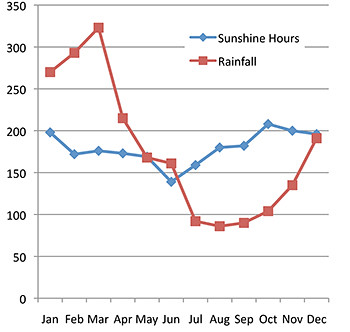 Vanuatu has two distinct seasons which can overlap and change from year to year... by weeks or even months so that the distinction between them can become blurred. As a generalization, the cooler dry season occurs between May and October, and the hotter wet season from November through to April. While winds are overall less in the wet season, it is also the time when cyclones and storms occur.

The fickle transition between seasons can mean that the dry can extend right through to January and at other times the dry season can attract more rain than the wet season. Further, while the wet is usually a time of greater rain, these can be brief leaving the rest of the day with beautiful clear skies.

Average rainfall and sunshine statistics provided by 'Vanuatu Meteorological Services' show that rainfall is significantly more during the wet season (compared to the dry season) although sunshine appears fairly even between the seasons, with slightly more sunshine during end of the dry and going into the wet.

What is a Tropical Storm ? 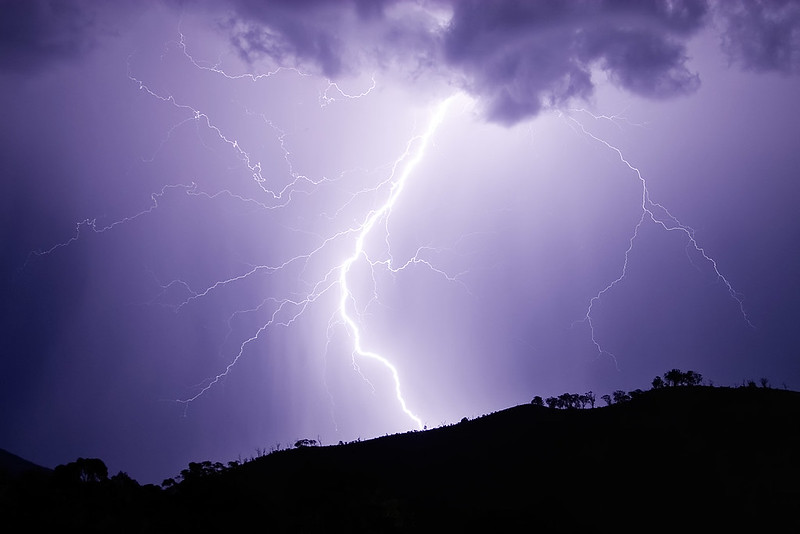 A Tropical Storm is a weak Tropical Cyclone. A tropical cyclone is a rapidly rotating storm system that has a low-pressure centre with strong winds and a spiraling collection of thunderstorms producing heavy rain and are defined by storm systems with winds greater than 34 knots (62 km/hr). Tropical storms and cyclones obtain their energy from the evaporation of water from warm tropical waters which rises and recondenses. The spiralling motion occurs in a clockwise direction in the southern hemisphere and while they cause mass destruction due to their associated high winds and sea surge, they weaken rapidly over land due to being cut off from their source of energy.

Vanuatu experiences tropical storms and cyclones during the wet season when ocean temperatures are at their peak, having a possibility of occurring from November onwards but with their highest probability in the months between January through to March, with the likelihood decreasing gradually from March through April.

What is the Wet Season ? 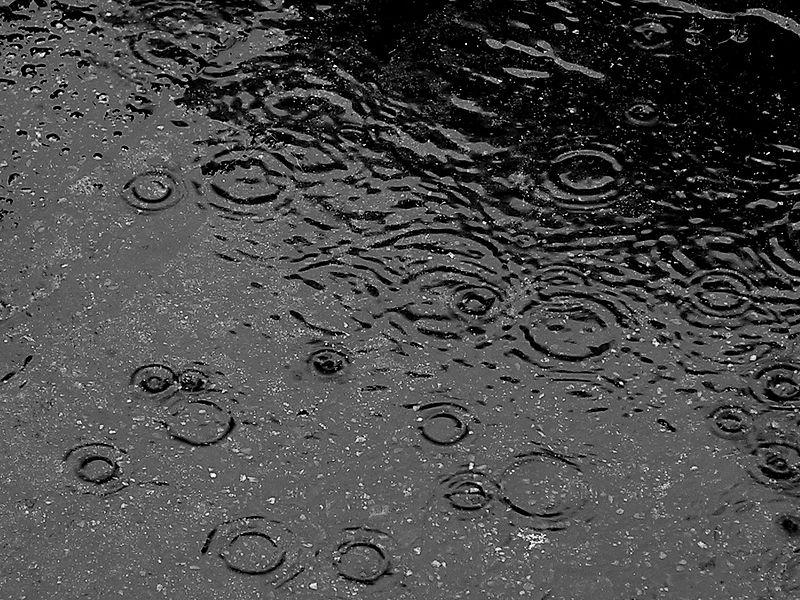 The wet season is associated with higher average daily temperatures including nighttime temperatures, and higher than average rainfall. On the island of Efate (where Port Vila is located), maximum temperatures gradually increase from 22 degrees and peak at around 31 degrees Celsius during the months of January/February and subside again.The average minimum temperatures rise from 16 degrees up to 26 degrees at the same months.

Rainfall over this period is more marked and increases progressively from October through to a maximum in March of approx three times the October rainfall, whereupon it falls off dramatically in April and further in May. Interestingly, sunshine hours are not adversely affected until February but cloud cover carries through to the end of May.

In short, travellers can expect the beginning of the wet season to have little effect - if not actually being beneficial to their holiday, as temperatures are warmer and rain in short bursts and having little influence on sunshine. The period between October through to well into February can produce some stunning weather and is a popular time for holidaymakers as it coincides with Christmas vacations.

What is the Dry Season ? 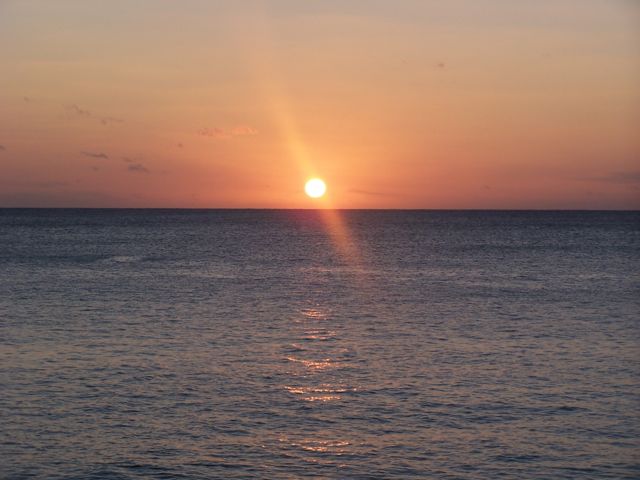 Conversely to the wet season, the dry season in Vanuatu is associated with lower average daily temperatures and considerably less rain. Maximum temperatures gradually decrease from April( around 30 degrees) down to a low of about 26 degrees Celsius during the months of July/August and gradually again. The average minimum temperatures correspondingly decrease from 22 degrees and down to an average of 16 degrees at the same months.Rainfall over this period continues to fall away at the commencement of the Dry Season and have fairly low levels right through to October onwards.

For travellers, the weather is quite settled and sunshine hours can be expected to be at their peak. However temperatures are a bit cooler and in a location exposed to the east and south, conditions can be windy.The dry season is extremely popular for holidaymakers escaping a temperate climate winter.

How Variable is the Weather ? 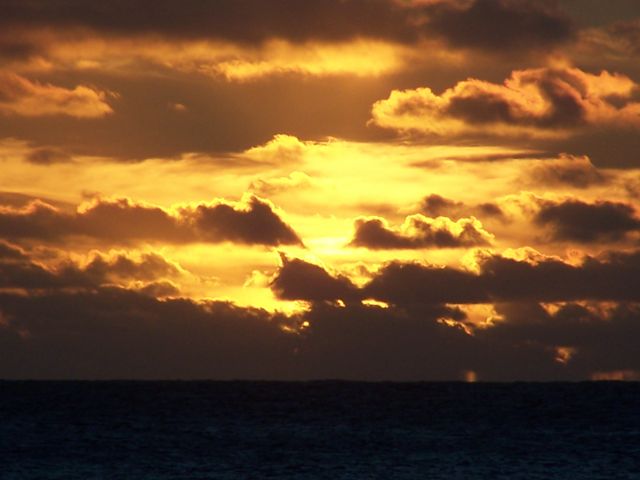 Winds are generally moderate and Vanuatu enjoys fairly calm conditions, ideal for travellers on holiday. Weather patterns are governed by the trade winds which are predominantly from the east to southeast at an average wind speed of 5 knots, during the wet season. However, these winds pick up during the cooler dry season and the southeast trades average at about 10 knots but are often greater than this, and larger swells and rough seas are associated with this.

The Winds determine rainfall, which is most commonly due to orographic lift of clouds over the higher mountainous interior regions and is obviously more prevalent on the larger islands. This means that the eastern and southern coasts receive far greater rainfall than the western and northern coasts. Sanddollar is situated on the western side of Efate and enjoys more settled weather with less rain. 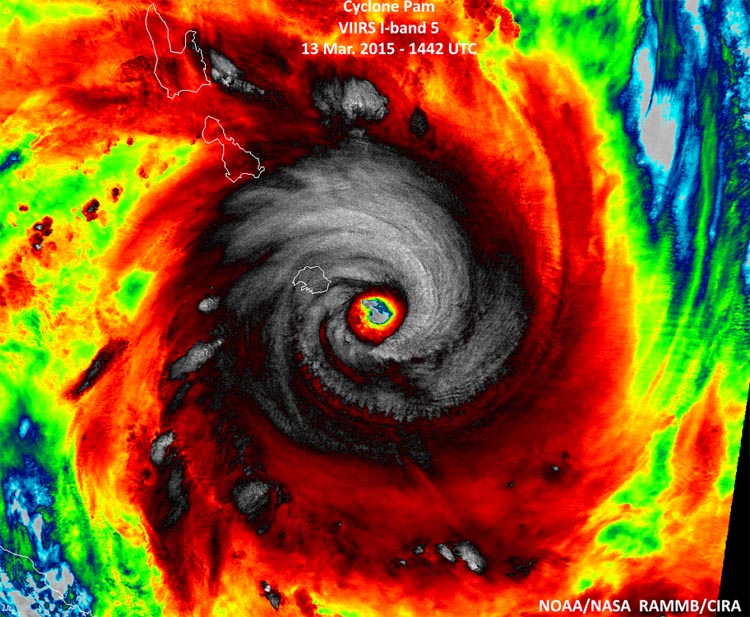 Yes - all of Vanuatu is subject to the passage of Tropical Cyclones.

Vanuatu spans over a vast area of mainly water, and the 'Vanuatu Meteorological Service' indicates that the territorial area (land and sea) of Vanuatu is a common route to approximately 20-30 cyclones per decade, with 3-5 causing severe damage. This equates to 2-3 cyclones in a cyclone season with the maximum frequency being in January and February.

Cyclones are very difficult to generalize about as they are very erratic in behaviour and can even reverse in direction. However, that being said they form anywhere between 5-22 degrees, although more likely to start at the latitudes closer to the equator and take a southerly course. They generally maintain their southerly movement until a latitude of 21-25 degree south where they tend to do a curve around to the east. As such most cyclones track vertically past most Vanuatuan islands and curve easterly as they pass Efate down to Tanna.

To give an idea of the probability of devastating cyclones, cyclone 'Uma' was considered to have caused the most damage to Port Vila and occurred in 1987, and which formed just below the Solomon Islands and moved in a southeasterly curve. More recently cyclone 'Pam', a Cat 5 cyclone, travelled in an almost vertical trajectory with a slight westerly curve, severely affecting almost all the eastern islands as it passed southwards, but completely devastated the southern islands, particularly Tanna. On Tanna, much of the natural vegetation was substantially damaged, while 90% of all housing was destroyed, along with 100% of food crops. The recovery from cyclone 'Pam' is slow and will take many years before normality will return.