Travel | Just Do It.

Like everything, ideas generally stem from one’s own experiences, and this is no different.

We have found that the most fascinating  sights, sounds, tastes and cerebral experiences which come part and parcel with ‘travel’, come not because you are there watching say as an observer, but only when you are forced into interacting with the fabric of society which you are visiting. Within this interaction comes a degree of ‘insight’ and an appreciation of how a people, a culture and a society live. Only then can you begin take in the many ‘sights’ or ‘attractions’ that we see as the ‘face’ of that people or society.

Therein lies a problem with most Australians and New Zealanders, we are very ‘Anglo-Saxon’ in our outlook, and ‘aloof’ in our disposition and demeanor. We don’t get involved, and tend to watch from a distance, and in so doing stop the very experiences which make a trip rich and worth remembering. In the end we may as well be watching it all on television !! A couple of cases in point, which I have remembered ever since. 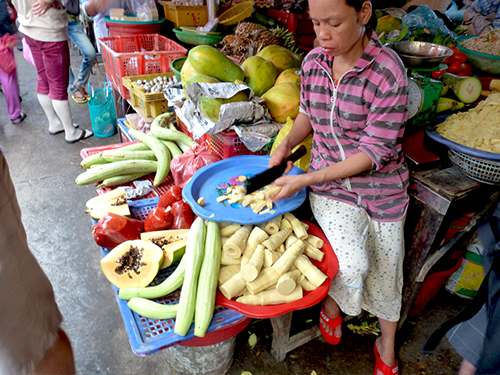 Trip to Java Some years ago we were travelling in Java, Indonesia which we have done several times, and instead of going through the middle where Yogyakarta and Solo are located, we decided to go along the less known coastal route. Of course not having any plan whatsoever we ended up in a small fishing village, completely lost where there appeared to be little in the way of accommodation, and it was getting dark. On top of this we had no understanding of any indonesian language, and it became obvious that the villagers did not see that many westerners.

At a loss we went into the nearest local restaurant, where we immediately felt uncomfortable as everyone of course looked around and appeared to stare at us, which was made worse by the fact that we couldn’t understand the menu. The local villagers saw our predicament and immediately fell over themselves to help us decipher what food was on offer. Most of this was through hand gestures and the repeating of words over and over. The ice was broken and we ended up staying for several hours, had a fantastic meal and made friends with everyone in the restaurant. Not only that we were escorted to the best guesthouse in the village to ensure our safety late at night. 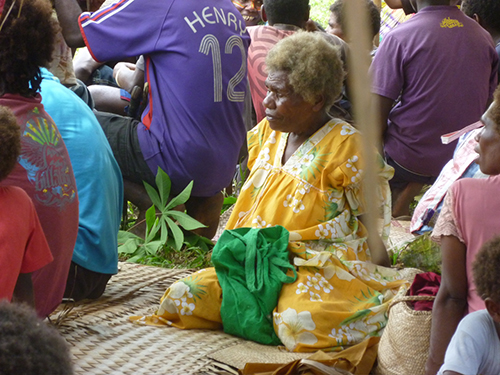 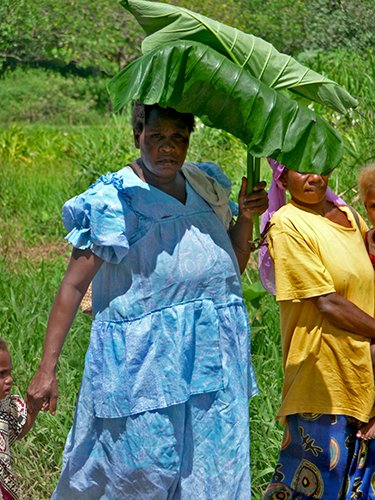 We lived in Papua New Guinea, for about four or five years, and would take on trips around the countryside as often as we could, and the practical dangers of doing so permitted. We often went with our friends Mike and liz, and the opportunity came up to do a long weekend trip along the coast from Port Moresby to Cape Rodney, where a local Papua New Guinean who worked with Mike had his home village.

The trip involved mainly dirt tracks, mud and lots of getting out and pushing. Once there, however, we were taken into the care of Mikes friend and a number of others, and spend most of the weekend walking from village to village, both along the beach and inland, and being introduced to the very essence of life in these friendly people.The coastal area was enclosed by a large bay and Mike was invited to take a part of a race between sailing outrigger canoes. At night we attended a number of weekend traditional dances and ceremonies, and walked back to our home village by our friends.

We had decided before we started on the trip that we would do a ‘hangi’ to thank the village for our stay, and had bought a pig, which we had stored in chilly bins with ice, on the trip down. On the day the villagers, in full knowledge of what we were doing, helped dig the pit, gave us their best cooking stones to use and provided all the vegetables, and drink for the feast. While there was somewhere between fifty and a hundred people present, we found out too late that none of them could eat the food because it was a pig and they were Seventh-Day Adventists. Worse, we had ruined their cooking stones because pig fat had got all over them. Fortunately, someone had the foresight to invite the neighbouring village who were not Seventh-day Adventists and the day was saved as the village had in effect honoured its neighbour. Our appreciation of village life had jumped hugely over the course of that weekend. 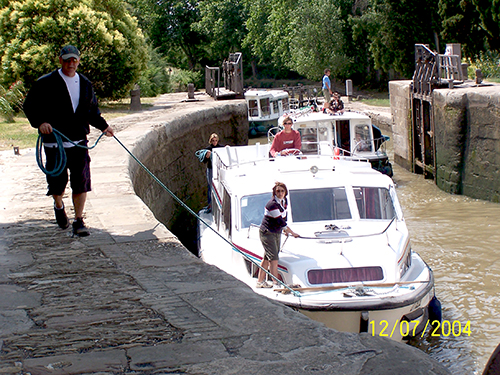 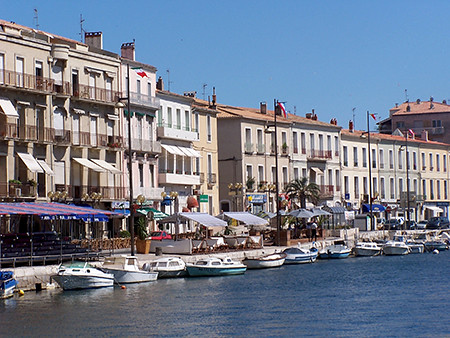 As a part of travels in France, we had decided to do a canal boat trip with some friends, which we thought would be a lazy relaxed interlude in the middle of a fairly hectic trip. Lessons were quickly learnt as I found out at first hand that canal boats require a certain amount of skill to hand, steering the boat head first into the side of a lock and shattering the front of the bow. After that, we initially settled down to enjoy the scenery surrounding the canal, stopping at various local villages along the way for lunch and dinner. We got to know a number of the people and families in boats travelling in the same direction, many of whom were French but also a number of European travellers, and all were in good spirits and thoroughly great company.

The trip involved in the order of fifty or sixty locks, where the level of the canal was raised a metre or so, but not in all cases, with some having a water level difference of five or six metres. If you were at the bottom, the pressure of the water entering the lock when the lock gates were opened, buffeted and rocked the boats, sometimes banging them together with some force and causing some damage. You had to hold on with ropes at the top, but as there were no handrails, there was a tendency to get pulled over the edge and down the five or six metres. While the water level was being raised the persons still on the boat, held and pushed the boat away from the lock walls so as not to grind the side of the boat against the wall itself. At one point I sliped and the force of water entering the lock had my leg stuck between the wall and the boat, and in danger of being shredded by the lock wall. It was my own lack of attention, which caused the incident but my son saw what had happened, jumped to the side of the boat and pushed with his legs propped against the cabin of the boat to free my leg.

We travelled on taking more care at the high locks we had to pass through. After a couple of days, we wondered why the number of boats travelling through the canal had sharply increased, and were told that all were headed to Carcasonne for the 14th July Celebrations, where huge fireworks displays are held every year at the famous double walled Castle. We all decided to follow and it became almost a pilgrimage to get there in time to see the show. The boats all worked together to get through the locks as quickly as possible as long queues developed, but we all tried to help each other out by fitting as many boats as possible in the locks to get everyone through in time. Queue jumpers were a minority, but happened and tempers flared. In one case it was too much for one boat around us, where upon a man in is forties jumped out of his boat, ran along the canal path, jumped onto an offending boat and king-hit the helmsman. After this things settled down and the community of boats made their way towards Carcasonne, dealing with transgressors in a collective manner. Our boat along with many others yelled and abused at a number of boats who tried to jump the queue, but inevitably we all ended up rolling around with the sheer fun of it all. In the end we all made it, and all on the boats walked into the town to watch the fireworks. It was a befitting and thoroughly enjoyable climax to a memorable trip.

Are we just being too safe ? 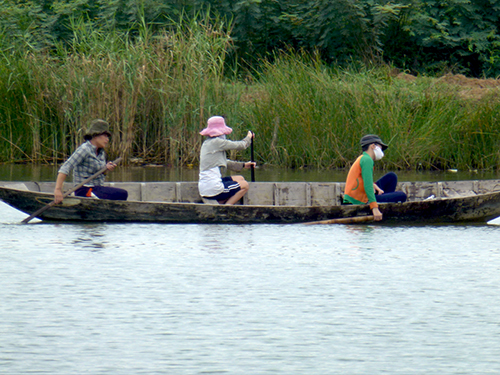 And yes all of the above is self indulgent and self serving, but the obvious point being made is that by getting in an participating, the traveller is rewarded by the experience. The problem is that while we like to think that we do this, we generally don’t. Examples of this are clearly illustrated by the mere fact that the world abounds with group tours where people are shuttled around in buses, from hotel to hotel, eating at specific tourist restaurants, and going to see the various attractions and sights with the aid of the infamous tour guides and there little flags. Even the more adventurous of us, who do independent travel, get in our cars and even when we are lost, refuse to ask directions, or go back the way we came because we have to follow certain directions. Both ‘Australians’ and ‘New Zealanders’ like to stay in Motels / Hotels so that we can keep to ourselves, rather than say go to a bed and breakfast, where you have to talk to the people. The younger of us tend to go in groups, and as a consequence tend to associate within the group pretty much to the exclusion of anyone outside of that group. We all tend to go and see the sights and attractions which appeal to us, or what we are comfortable with, and these may not be the things which form an important link for that actual country or culture. So in a sense we the travellers tend to isolate ourselves from the very place that we are travelling through, and in the process experience less of the people, the society and the culture that goes with it.

So if you are going to ‘Travel’, make it ‘Real Travel’ – you will remember it as one of life’s experiences rather than just a holiday.